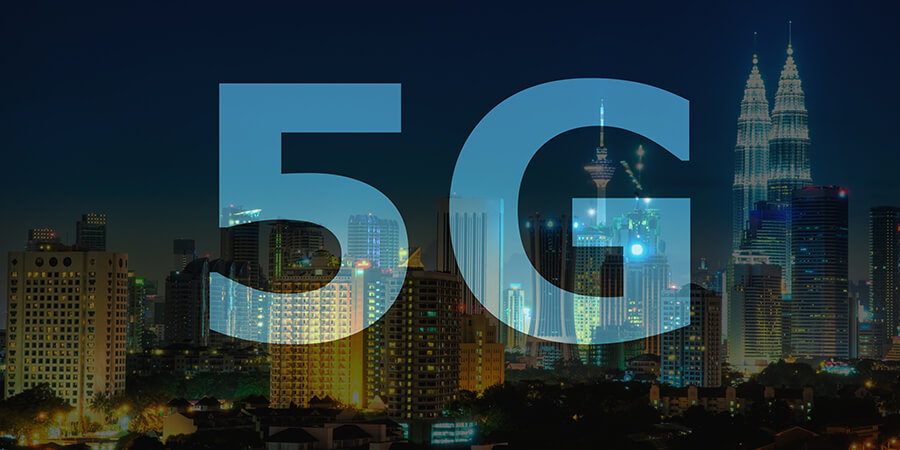 Ahead of their impending merger, both Celcom and Digi will take a 12.5% stake each, while YTL and TM will each have a 20% stake. The remaining two telcos, Maxis and U Mobile, have also agreed to purchase wholesale capacity from DNB, after talks of the two operators retracting their decision to take stakes in the government agency as they reportedly did not see benefits in being minority shareholders.

Coverage to Grow, but Not Without Challenges Ahead

5G is an important pillar in the digital economy. In an effort to realize 5G, a state-controlled 5G single wholesale network by Digital Nasional Berhad (DNB), owned by the Ministry of Finance Malaysia, was established in March 2021 to undertake the deployment of 5G infrastructure and extend 5G as a wholesale network.

However, the road toward 5G has not been smooth sailing, as all stakeholders find it difficult to see eye to eye on how 5G is to be deployed in the country.

Earlier this year, mobile operators debated with the Malaysian Communication and Multimedia Commission (MCMC) over terms for the country’s wholesale 5G network, with the four largest operators – Maxis, Celcom Axiata, U Mobile and Digi – pushing for two wholesale networks.

Jointly, the operators countered the government’s proposal to seek at least a 51% stake in DNB, citing concerns over unaffordable 5G pricing for consumers and enterprise as an initial stumbling block. However, the government did not waver on its August 31,   deadline. It believes that a shared network will be more cost-effective and enable infrastructure development to speed up. On the contrary, some industry players are of the opinion that this deprives operators of the competitive advantage of differentiating their services.

However, after initial hesitations, all six mobile operators in the country agreed to the 5G agreement, but with Maxis and U Mobile deciding to retract their decisions at the eleventh hour.

While all six mobile operators have now firmed up their decision to move forward, the MCMC foresees challenges ahead for state-level rollouts owing to bureaucratic red tape by local authorities.

By the second quarter, Malaysia’s 5G rollout had reached 27%. While this indicates progress made in terms of 5G service coverage, MCMC’s Chief Operation Officer, Datuk Mohd Ali Hanafiah Mohd Yunus, noted that there is still room for improvement when it comes to addressing the requirements of local councils and states for resolving bureaucracy issues.

Deputy Minister of Communications and Multimedia Datuk Zahidi Zainul Abidin has even called for the 5G contract to be given back to MCMC as telcos have not been aligned with the government. Zahidi also encouraged the public to inform MCMC if an area has poor internet access so that telcos can be instructed to place transmitters at respective sites.

"We at MCMC can only ask them or implore them to place these transmitters to increase the strength of the transmitters while DNB don't have the authority to force them or reprimand them for not doing so,” Zahidi said. "That's why I kept saying in this house to give this 5G rollout project back to the MCMC so we can then instruct these telcos to follow our instructions as we have an Act to compel them to do so.”

According to IDC, there will be 6.2 million IoT connections in Malaysia by 2025, nearly doubling from just 3.9 million connections in 2020. In the report, IDC stated that “IoT alone will generate significant IP traffic, which further highlights the need for expanded backhaul bandwidth to support both 5G cell sites but also fixed aggregation at factories, stadiums, and various government and smart city locations.”

As 5G penetration takes root in Asia, Malaysia is reportedly aiming to extend approximately 80% of 5G network coverage in populated cities, including Kuala Lumpur, Cyberjaya and Putrajaya by the end of this year, with plans to extend 5G to other cities by the end of 2024. As defined by MCMC, “populated areas” refer to areas with at least 20 people per square kilometer.

In a recent report by Opensignal, Kuala Lumpur has the second highest 5G download speed of 376.6 Mbps among 11 cities in Asia Pacific, behind only Seoul, with a 5G download speed of 453.1 Mbps. The report cited that the reason behind Kuala Lumpur’s high ranking is that YTL Communications’ Yes 5G is the first and only operator offering commercial 5G services in Kluang, Malaysia, and hence, DNB has a lighter 5G network load compared to other Asia-Pacific cities.

According to the Malaysian Investment Development Authority, Malaysia is expected to have 2.1 million 5G subscribers by 2025, or an estimated penetration of 6.6 5G subscribers per 100 people. By then, 5G is projected to contribute about RM5.3 billion to Malaysia’s gross domestic product.

Mohd Ali Hanafiah has said that the country is on track for Phase 1, which spans 2020 to , with Phase 2 to be scheduled for the end of 2022 through 2025. Under this project, Malaysia aims to lay out plans for private and public sectors to provide wider coverage and a better broadband quality experience for its people, as 5G adoption grows.

Investments for Phase 1 of the project are estimated at RM28 billion. 60% will be funded by the private sector, while the government will contribute to the remaining 40% via the Universal Service Provision (USP) fund to ensure that rural areas will be well covered to bridge the digital divide.