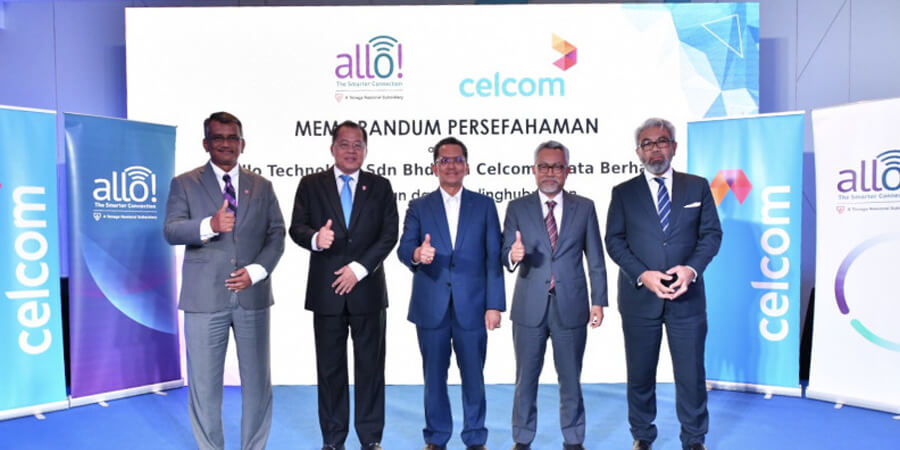 Celcom has announced that it has signed a partnership deal with Allo aimed at improving telco-related services and connectivity solutions.

Among the areas that they seek to focus on are fiberization, network resiliency, connectivity, information and communications technology (ICT), internet of things (IoT), 5G and smart solutions.

In a statement, Celcom said the partnership will enable a faster fiber infrastructure rollout by Allo while facilitating the rapid deployment of high-speed broadband in targeted industrial areas, network base stations and fiberization of Celcom-selected sites.

The collaboration between Malaysia’s major telecom provider and Allo, a wholly owned subsidiary of Tenaga Nasional Berhad (TNB), will also seek to speed up the progress of smart cities through digital connectivity by both parties.

“The development of a good digital ecosystem requires the cooperation between various sectors, including public and private sectors, towards achieving the nation’s aspirations that have been outlined in the government’s plans for the benefit of the people. Today’s initiative should be continued because the cooperation between companies will of course bring results that have high impacts to the people and the nation,” said Dato Sri Haji Mohammad Mentek.

“By leveraging on over 25,000km of TNB’s fiber optic infrastructure, Allo has peninsula-wide coverage to support a rapid and cost-effective deployment of high-speed broadband connectivity services. We believe the digital economy sector is crucial to the future development of Malaysia’s economy by supporting the growth of the nation’s GDP. Our role as the catalyst for the nation’s economy is closely related to the implementation of a modern, reliable, and extensive connectivity network as underlined in the MoU between Allo and Celcom today. Through a reliable connectivity ecosystem that is offered by Allo and Celcom, it can be a driving force for comprehensive value creation across the industry, the development of smart cities, and the ability to transform the socio-economic landscape in Malaysia,” he said.

Commenting on the collaboration, Datuk Idham Nawawi, chief executive officer of Celcom Axiata Berhad said that Celcom and Allo’s strategic partnership will leverage the strengths of both organizations towards the acceleration of digitalization across Malaysian Homes and Enterprises as well as      significantly boost network operational efficiency.

“The opportunity to provide high quality and affordable fibre connectivity to homes across the nation is immense, and through this partnership, both parties can play a much larger role and make significant impacts towards digitising Malaysian societies. The strength of Celcom with the widest mobile network and the potential reach of Allo’s fibre via TNB’s infrastructure opens this partnership to a world of new opportunities,” Idham said.

The collaboration is also expected to boost efforts from Allo and Celcom to drive connectivity and digitalization across industries with technology solutions and services such as ICT cybersecurity solutions, cloud, data centers and managed services, as well as IoT smart city solutions.