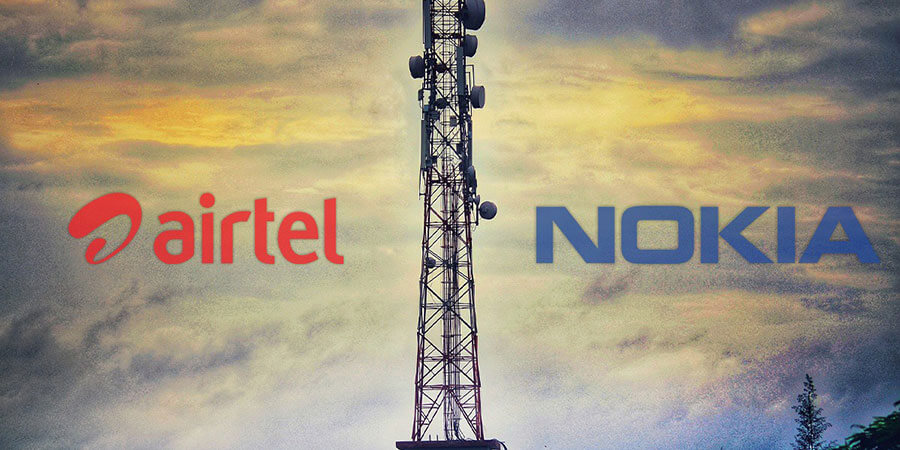 Nokia and Bharti Airtel (“Airtel”) announced a multi-year agreement to deploy Nokia’s SRAN solution across 9 circles in India, helping Airtel to enhance the network capacity of its networks, in particular 4G, and improve customer experience. The rollout, which will also lay the foundation for providing 5G connectivity in the future, will see approximately 300,000 radio units deployed across several spectrum bands, including 900 Mhz, 1800 Mhz, 2100 Mhz and 2300 Mhz, and is expected to be completed by 2022.

These Nokia supplied networks will give Airtel the best possible platform for when 5G networks launch across the country, with their low latency and faster speeds. Independent network performance testing company, RootMetrics, recognized Nokia as market leader in LTE in terms of performance including network speed, network reliability and data performance.

India is the second largest telecoms market in the world and is expected to reach 920 million unique mobile customers by 2025, which will also include 88 million 5G connections according to the GSMA. The country is experiencing a massive increase in demand for data services with traffic increasing by 47 per cent in 2019 alone, according to Nokia’s MBiT Index 2020. Nokia’s SRAN solution will help Airtel to address this growing demand by adding network capacity and ensuring a superior quality of experience to its customers.

Nokia’s SRAN solution helps operators to manage their 2G, 3G and 4G networks from one platform reducing network complexity, increasing cost efficiencies and future-proofing investment. Nokia will be the sole provider of SRAN in these 9 circles. The deal will also include Nokia’s RAN equipment, including its AirScale Radio Access, AirScale BaseBand and NetAct OSS solution, which will help Airtel to monitor and manage its network effectively. Nokia Global Services will also play a crucial role in the installation, planning and deployment of the project, which will be executed via the cloud-based Nokia Delivery Platform.

Gopal Vittal, MD & CEO (India and South Asia) at Bharti Airtel, said, “Airtel has consistently topped network performance charts in studies conducted by multiple global experts. We are committed to continuously invest in emerging network technologies to provide a best-in-class experience to our customers. This initiative with Nokia is a major step in this direction. We have been working with Nokia for more than a decade now and are delighted to use Nokia’s SRAN products in further improving the capacity and coverage of our network as we prepare for the 5G era.”

Rajeev Suri, President and Chief Executive Officer at Nokia, commented, “This is an important agreement for the future of connectivity in one of the world’s largest telecoms markets and solidifies our position in India. We have worked closely with Bharti Airtel for many years and are delighted to extend this long-standing partnership further. This project will enhance their current networks and deliver best-in-class connectivity to Airtel customers but also lay the foundations for 5G services in the future.”