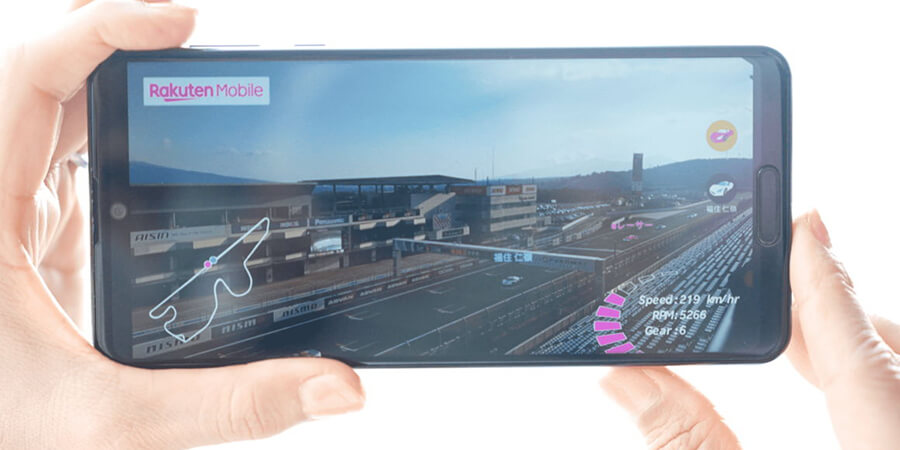 Rakuten Mobile has successfully conducted a demonstration of motorsports that fused the real and the virtual at the 2022 Inter Proto Series POWERED BY KeePer Round 2, held by Inter Proto Motor Sports Co., Ltd. Using 4G and 5G mmWave provided by Rakuten Mobile, an e-race was successfully conducted that fused the real and virtual through the remote transmission of driving data and the real-time synchronous augmented reality (AR) display of the virtual car and car racing information during the race.

The demonstration experiment was conducted simultaneously at two locations: Fuji Speedway, the venue of the 2022 Inter Proto Series POWERED BY KeePer Round 2 located in Shizuoka prefecture, and the Rakuten Mobile Ebisu Store in central Tokyo.

By transmitting the data of the test car driven by an actual racing driver on the Fuji Speedway in real time to the racing simulator driven by the e-racer at the Rakuten Mobile Ebisu Store, the e-race between the test car and the virtual car was successfully displayed on the game screen.

A telemetry system that obtains and transmits data from sources including multiple sensors to measure the steering angle and other factors, GPS and cameras installed in the test car running on the circuit enabled the display of an equivalent virtualized test car for e-racing on the game screen.

5G mmWave was used for communication between the racing simulator and the game server, realizing a realistic racing experience in real time.

At Fuji Speedway, by holding up a smartphone — equipped with a dedicated mobile app developed by Rakuten Mobile — directed at the course from the spectator's seat or wearing smart glasses and watching the race, spectators were able to view the race between both the test car that actually ran on the real-life circuit and the virtual cars driven by the e-racers competing at the Rakuten Mobile Ebisu Store.

In addition, driving data such as car position, speed and engine speed generated by both the test car and virtual car in motion, the perspective video of the racing driver, and the game screen video of the e-race were also available for display on the same app.

By utilizing a third party’s visual positioning system (VPS) technology, it was also possible to display AR content for spectators in seats around the circuit with higher accuracy.