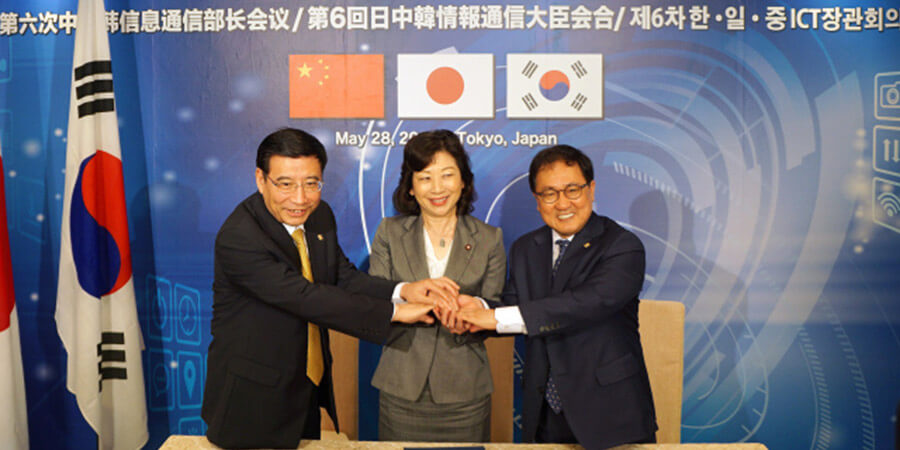 The global momentum towards the development and subsequent deployment of next-generation technology continues to gather pace. However, it's in Asia where most of the significant groundwork has been made in an effort to pave the way for the emergence of 5G.

Whilst it's clear that the race to deploy 5G technology is much of a global effort, there can be no disputing the fact that the race to become the first nation in the world to commercially launch 5G network services is between China, South Korea, Japan and the United States.

Japan, China and South Korea have entered into discussions in a bid to find the best practices and ways to cooperate on 5G. Communication ministers from Japan, China and South Korea all recently met at a special summit in Tokyo - and it has been disclosed that the three countries have all universally agreed to work together as part of a coherent approach to foster the development of 5G networks.

Japan's Communication Minister Seiko Noda said, "Our 3 countries should maximize the use of information and communication technology to build a more open global economy. It's also important for us to cooperate to guarantee ICT security."

In this feature, we'll attempt to examine the technological advancements in relation to the next-generation technology that have already been made by the countries aforementioned on an individual basis, in an effort to determine which country is best placed to win the race for 5G commercialization.

South Korea has undergone a dramatic transformation in recent decades. Once considered a rice republic, it has now emerged as a global technological and economic heavyweight. South Korea's position as a global leader in technological advancements was reiterated further this year when 5G made its global debut at the 2018 Winter Olympics.

It used the Winter Olympics as a testing platform, as part of its overall objective which is to ultimately progress its 5th generation wireless telecommunications. South Korean telecommunications colossus KT Corporation offered spectators a '5G experience' at the games, by providing them with the opportunity to watch live events in HD video with a 5G equipped table or VR headset.

Spectators were able to watch the events in real-time - there was a delay of one millisecond, but that is much too short for a human to notice. It enabled spectators to view a bobsled hurtling down a track at thunderous speeds through an athlete's head cam, which makes the spectator feel like they're in the bobsled.

South Korea's telecommunications operators supported by the government have decided to collaborate on a single nationwide 5G infrastructure according to widespread reports. It has been claimed that a collaboration effort between all mobile operators would save the major players an estimated $938m over a ten-year period.

The objective of this is to ultimately facilitate South Korea's primary goal which is to lead the Fourth Industrial Revolution and support the early commercialization of 5G technology. South Korea is undoubtedly well positioned to become a global leader in relation to 5G. This has been evidenced further by the fact it has recently surpassed the United States in a new study on 5G readiness.

South Korea still trails China in relation to 5G readiness, but it is clearly closing the gap on China for a combination of factors. One of the factors is the role of its progressive and supportive government in relation to spectrum allocation and regulation, and the other is the uniformed approach by the country's operators to collaborate to construct a single nationwide 5G infrastructure. The synergy of these factors could help South Korea lead the way in 5G commercialization.

Japan
Japan is currently preparing to host the Olympic Games in 2020, which is one of the biggest sporting events in the world. Millions are expected to descend on Tokyo throughout the event which lasts from July 24th to August 9th.

One key aspect of its preparation for the Olympic Games in 2020 centers on the adoption of 5G technology. Japan is hoping to use the games as the perfect opportunity to showcase its prowess and leadership in the commercialization of the next-generation wireless technology.

Japan's telecommunications operators have been embarking on a number of 5G trials. NTT DoCoMo has conducted several with Chinese vendor Huawei. The two conglomerates recently announced they had agreed to collaborate with Tobu Railway on the testing of a 5G millimeter wave system at Tokyo Sky-Tree Town.

These 5G trials have been endorsed, advocated and heavily supported by Japan's Ministry of Internal Affairs and Communications (MIC) who are confident that 5G networks can be commercially deployed in time for the Olympic Games in two years.

Representatives of both NTT DoCoMo and Huawei said the trial was conducted with the main aim of researching technical conditions to use the 28 GHz band and other candidate spectrum for 5G in dense urban areas. Both companies completed a successful joint field trial for 5G mobile communications over a long distance using the 39 GHZ mmWave band in Yokohama.

However, NTT's rival SoftBank is also prominent in relation to 5G activity and is desperate to secure its footing in its effort to propel Japan's push for next-generation technology deployments. The Japanese telecommunications operator has also entered into a partnership agreement with Huawei in an effort to demonstrate potential 5G use cases for its enterprise partners.

SoftBank has been also working with Ericsson in the execution of 5G trials in Japan. In September 2017, the two companies had announced plans to conduct a joint trial of 5G in the 4.5 GHz band in urban areas of Tokyo. This 5G trial included two new radios, virtualized radio access network and evolved packet core RAN, beamforming, massive MIMO functionality and support services.

SoftBank said it is planning various experiments to study 5G technologies and aims to launch 5G commercial services around 2020.

Japan will continue to focus its resources and efforts on the implementation of 5G services. However, the rigid 2020 timeframe for the Olympic Games means that China, South Korea and the United States have all made gains. Japan will undoubtedly become a major 5G player, although it remains likely that either, South Korea, China or the US will beat them in relation to the network commercialization of 5G.

China
China is an economic and global superpower across all industries and is being tipped to eventually overcome the United States as having the largest economy in the entire world. According to a number of recently conducted studies, China is also winning the race to deploy 5G technology, and if it does pip the United States to network commercialization of the next-generation technology then that will be very significant.

Qualcomm's CEO, Steve Mollenkopf, declared that he firmly believed 5G will have a revolutionary societal impact, and compared its emergence to the introduction of electricity. That statement highlighted the consensus amongst the industry that 5G is going to be nothing like anything we had experienced before. It couldn't be compared to 2G, 3G or 4G. 5G will transform lives, so getting a foothold in relation to its commercialization is critical - and China is acutely aware that if it can emerge as the global leader of 5G by gaining that foothold, then it will inevitably become home to the world's largest economy.

The Chinese government has been aggressive and robust in its push to develop its 5G industry, naturally it has favored its own companies such as Huawei and ZTE - which both make equipment necessary for the technology to work.

However, China's 5G efforts were almost derailed following an escalation in trade tensions between China and the United States. The Trump administration had said that the existing trade agreements and practices currently in place between the two countries was unfair. The US President declared that the United States had to get tougher on its trade deal with its Chinese counterparts.

In addition to this, a number of high profile and prominent Republican congressman tabled legislation which prohibited any US government departments from using telecoms equipment manufactured and supplied by either Huawei or ZTE. The Republican congressman believed that both companies were a severe risk to national security, claiming both telecommunication vendors had engaged in espionage against the US government, by allowing the Chinese government to spy on the United States using devices manufactured by ZTE and Huawei.

Representatives of both ZTE and Huawei vehemently denied and refuted the allegation being aimed at them by the US intelligence community. Tensions between the two nations deteriorated further following the decision by the US Department of Commerce to impose an exports ban which would prohibit US companies from selling equipment and parts to ZTE for seven years - after it claimed that ZTE had failed to make the relevant changes to its management and board following trade violations it committed in 2016.

ZTE released a statement saying that the draconian ban had forced them to suspend all major operating activities and said the ban would put them out of business. Chinese officials pleaded with the US to amend the ban and the US President intervened vowing to save ZTE from going out of business. He rescued ZTE by rescinding the initial ban, imposing a fine of $1.3bn, insisting it makes changes to its management and board and have provided the US with high-level security guarantees. This has put ZTE back in the 5G game, although the damage this saga has done to the company remains unknown, although sources in China estimate the vendor has lost more than $3bn.

Due to the size of the Chinese market, which is expected to be the biggest for 5G by 2022, according to data from CCS Insight, both Huawei and ZTE could have an advantage. Huawei, in particular, has been trying to broaden its reach beyond China.

Beijing has signed 25 agreements with telecoms operators around the world to trial 5G equipment. It also announced plans earlier this week to scrap domestic data roaming fees and reduce prices for mobile internet. China's leadership hopes to have pre-commercial products ready by the end of 2018.

Such a top-down approach is helping to boost the efforts of local carriers to roll out 5G. State-owned China Mobile, for example, plans to build this year what it claims would be the world's largest 5G trial.

In dozens of studies conducted on 5G readiness, China is No.1, and leading the way towards commercialization and there's no doubt that the US and Europe are lagging behind. The US dominated the 4G industry and its economy soared as a result. The loss of leadership in 5G would hugely be detrimental to the US economy. China knows if it can continue to charge forward with its investment in 5G development, it will undoubtedly overtake the US as the world's most powerful economy. It's best positioned to do just that, so it's up to the United States to stop them, but is it already too late? The race to 5G is certainly heating up.