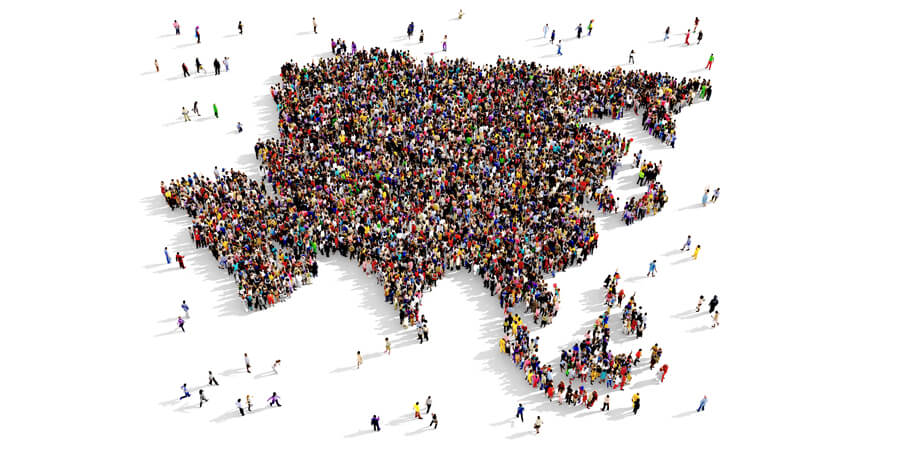 5G is no longer a farfetched technology. It’s here. Vendors around the world have been in a fierce competition to offer operators 5G equipment and lead the way in the digital era. The capabilities of the fifth generation technology are tremendous and so far, Asia has proven itself as a pioneer in this field. Consumers in South Korea - where nationwide 5G mobile network has been launched in a world first - have already subscribed to 5G, Hong Kong has released its 5G spectrum roadmap and China has just issued 5G licenses for commercial use.

Asia appears to be leading the race to 5G with the first adopters being most likely China and South Korea. Countries in Asia have increased their spending on wireless communications infrastructure to build new sites. Investment in 5G will have an unprecedented economic impact. Smart cities will rise where self-driving cars and connected devices will pave the way for a new lifestyle.

A report commissioned by Deloitte showed that China has 10 times as many sites as the US. According to the report, the US needs to spend almost three times the amount that China spends to generate an equivalent amount of wireless network capacity.

The level of 5G readiness varies between countries, but one thing is sure, Asia is ready. Almost every country in the continent has drafted pertinent strategies and roadmaps and operators have initiated trials to test the technology.

South Korea renowned for its technological prowess and progressive approach to emerging technologies has secured a world first in April following the launch of its nationwide 5G mobile network.

South Korea’s three major telecommunication operators collaborated on the project after it was asked by the government to work together in an effort to accelerate the deployment of their 5G networks.

SK Telecom, KT and LG Uplus all announced the launch which led to a late-night scramble that enabled a handful of users to access the new super-fast wireless technology. The commencement of the 5G services was launched at 11pm local time and was two days early ahead of the scheduled launch which was April 5th, catching many off guard.

Seoul has prioritized 5G as sees it as its best opportunity to stimulate its stuttering economy which has seen its GDP stagnate in recent years. South Korea along with the US, China and Japan had all been in a race to claim the title as the world’s first provider of the ultra-fast network. The victory is being seen as a huge coup by many ICT leaders in South Korea.

The reason it launched two days ahead of schedule was due to mounting speculation that US telecommunications behemoth Verizon was set to launch its 5G services which prompted a frenzied response from South Korean operators desperate to be the first.

In its efforts to establish itself as the global leader in 5G, South Korea announced plans to invest $26bn in its 5G ecosystem. Investments will span a variety of segments, such as autonomous driving, digital healthcare, smart cities and smart factories.

President Moon-Jae outlined the South Korean government plans and proposal at the launch of 5G services for consumers at Olympic Park in Seoul. It will make the investment over a period of four years.

South Korea’s progressive leader vowed that the country will create the world’s best 5G ecosystem and will attain 15% of the 5G market share by 2026, which it believes will make it the market incumbent.

Moon-Jae revealed that the government will reduce taxes on network construction by up to 3% in an effort to facilitate and support the nationwide rollout of 5G infrastructure.

Specific initiatives targeted by the government as part of its push include introducing self-driving shuttles in major cities by 2020; 1,000 5G-powered buses in provincial municipalities in five years; and developing emergency medical treatment services by 2021.

All told, the president predicted the global 5G market would be worth KRW1.16 trillion by 2026, around double the size of the world’s semiconductor industry.

End of May, the number of 5G subscribers has reached 260,000 in South Korea, according the government. The Ministry of Science and ICT issued the statement weeks after operators launched 5G mobile commercial services.

Consumers have, however, filed some complaints related to the coverage and speed of 5G. The main problem was that mobile devices were displaying a 5G symbol when users on LTE were near basestations compatible with 5G. The Ministry confirmed that facing such issues is very normal given that operators are still building basestations and upgrading software.

A total of 54,202 5G basestations have been deployed so far, an increase of 7% from 22 April, however coverage in the country was still restricted to urban and more populous areas.

Korea has been pioneering the journey to 5G deployment, being one of the first in the world to offer 5G to mobile consumers. Operators in the country had also launched commercial 5G services to businesses using mobile routers.

Out of the 260,000 subscribers, KT, the country’s second largest operator, has announced it secured 100,000 subscribers so farm whereas SKT and LG Uplus are yet to reveal their figures.

Hong Kong’s Office of the Communications Authority (OFCA) has finally released a spectrum roadmap for 2019-2021.

Hong Kong is recognized as being most of the most ‘connected’ and ‘smartest’ regions in the world and it wants to become a global leader in relation to the development and subsequent deployment of 5G networks.

In addition to previously announced plans to assign nearly 4,500MHz of 5G spectrum across five frequency ranges this year, OFCA said it will allocate 160MHz of spectrum in the 600MHz and 700MHz bands from July 2021.

The agency has stated that it aims to hold a consultation this year, but conceded that the target date and timing of the earliest release and assignment are ultimately subject to progress in switching off analogue television broadcasting services.

The outcome of frequency coordination with China on the use of the two bands to avoid radio interference across the border is another factor.

In March, Hong Kong’s Office of the Communications Authority (OFCA) announced HKT, China Mobile Hong Kong and SmarTone were each assigned 400MHz of spectrum in the 26GHz and 28GHz bands, opening the door for the operators to launch 5G services.

“After the issuance of 5G licenses, we will continue to welcome foreign companies to actively participate in China's 5G market, seek common development of China's 5G, and share the achievements of China's 5G development,” said Miao Wei, the minister of industry and information technology, according to the ministry's Twitter-like Weibo account.

Chinese telecom giant Huawei is a global leader in 5G development but its ambitions have faced challenges from the United States, which has urged other countries to shun the company over concerns that its equipment could be used by Beijing's intelligence services.

Commenting on the ministry's announcement, Huawei said it will "fully support" the Chinese operators to build 5G. “(We) believe that in the near future, China's 5G will lead the world,” Huawei said on Weibo.

Days before this announcement, Chinese colossus Huawei had tested the 5G download on its foldable phone, the Mate X. Download rate exceeded 1Gbps.

In the race to 5G, ZTE Corporation, announced the ZTE Axon 10 Pro which is the first 5G smartphone. ZTE demonstrated at the launching event in China the 5G flagship smartphone on live with the 5G network, providing an exponentially improved mobile connected experience and showcasing the advantages of low latency, high transmission speeds and fast data exchange. The ZTE Axon 10 Pro 5G will also be available soon in Finland and Austria.

ZTE is a 5G pioneer and one of the leading tech companies in the 5G segment. Early by the end of March, ZTE has become the first telecommunications manufacturer to complete the 5G end-to-end connection with the carriers in China.

Xu Feng, CEO of ZTE Mobile Devices represented: “ZTE is always active in promoting and accelerating the 5G end-to-end commercialization process. We have submitted over 3,500 5G patent applications, among which including thousands of terminal-related 5G patents. ZTE is keeping open in 5G ecosystem development by cooperation with leading carriers worldwide and industry-chain partners to let 5G happen in the near future.”

A public consultation has been launched by Singapore’s Infocomm Media Development Authority (IMDA) to determine the suitable regulatory framework needed for 5G technology in order to start deploying the technology by 2020.

The IMDA is yet to receive feedback from both the public and the telecoms industry regarding the best approach to 5G spectrum allocations and deployment. The baseline requirements for spectrum need to be determined in order to deploy the technology as soon as possible and enable a broader 5G ecosystem within the country.

During the first wave of spectrum allocations for 5G, the regulatory body plans to implement the 3.5G-Hz and 26-GHz onto the 28-GHz frequency bands. They have also stated that this amount will be enough for more than two 5G networks.

For the first phase of the allocation plan, mobile operators are expected to submit detailed proposals of their plans for 5G deployment. Following this, the proposals will be assessed with regards to their financial capacity and how they could meet baselines requirements like meeting performance targets.

IMDA chief executive, Tan Kiat How, stated, “This public consultation is an important step in IMDA’s plans to launch 5G mobile networks and develop a vibrant 5G ecosystem in Singapore.”

“I encourage interested parties to share your views with us. These insights will guide our regulatory approach and industry development efforts in ensuring Singapore’s connectivity infrastructure remains globally competitive in support of our Digital Economy ambitions.”

Just like all Asian countries, Thailand is getting ready for 5G rollout. The first 5G test center was established earlier this year in Bangkok and the National Broadcasting and Telecommunications Commission (NBTC) is establishing additional testing centers at Khon Kaen University, Chiang Mai University and Prince of Songkla University. It will most likely sign as well MoUs with three engineering faculties by August.

Secretary-General of the National Broadcasting and Telecommunications Commission (NBTC) Takorn Tantasith said that the country plans to attract both China’s Huawei Technology and US-based vendors to help develop infrastructure and testing centers required for 5G.

Thailand has shown a neutral stance towards the Huawei/US case and chose to avoid taking sides in the technology and trade war.

The NBTC has called upon all major vendors to take part in 5G test framework including Huawei, Intel, Cisco, Qualcomm and IBM. Huawei was the only one so far to agree on working on a test site.

The 5G centers established in Thailand will allow the country to be among the world’s leaders in adopting 5G and will put it on the right track towards achieving the government’s national agenda which includes a 20-year digital transformation roadmap. Such centers will facilitate operators’ deployment of the fifth generation technology and will allow them, alongside vendors, to showcase the potential the technology has to offer to people.