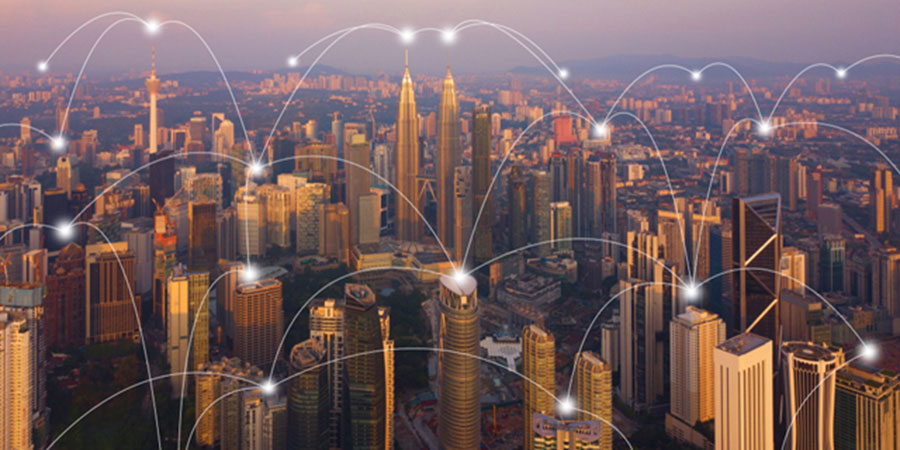 Malaysia’s telecommunications industry is one that is simultaneously rich in history and revolutionary in its plans for the future. From the moment the first telegraph line was laid in Kuala Kangsar connecting the British Resident to the Deputy British Resident in Taiping in 1874, the country’s telecommunications field has undergone multiple metamorphoses to become the industry powerhouse it is today; effectively being one of the first few countries in Asia to fully embrace the inevitable changes that come with an evolving communications sector.

One of these examples include investing generously in telecoms infrastructures which include MSC Malaysia (formerly Multimedia Super Corridor) where visitors are able to experience the nation’s first “smart cities”, Putrajaya and Cyberjaya. Additionally, high-end ICT is also being implemented for the use of internal transportations like the Light Rail Transit (LRT) and the KL Express Rail Link. Malaysia’s internet infrastructure has also grown tremendously to be on par with other developing countries through the deployment of the 3G, 4G and now soon to be 5G services in mobile phones.

Although these achievements are just the tip of the iceberg for the country’s ever-progressing telecoms sector, it is important to note that without first acknowledging its vibrant and somewhat complex past, it would be difficult for future generations to truly appreciate the importance of such an industry and what it means to be part of a society that is not only helping to shape telecommunications as we know it, but to advance alongside it towards a more seamless and connected nation.

History of telecommunications in Malaysia

Although the wide use of telegraphs was connecting the country in 1874, it wasn’t until 1891 that Malaysia (then Malaya or Tanah Melayu) introduced telephone services beginning with the first telephone exchange in Kuala Lumpur. The formative years of the telecoms industry saw a total of 21 telephones in all of Kuala Lumpur, buttressed by 400 miles of telegraph and telephone lines. Seventeen years later in 1908, the country had a fairly advanced telecommunications system for the region.

During this time, both the postal and telegraph services were consolidated into one entity that would be responsible for governing the country’s telecommunications services known as the Post and Telegraph Department, owing in part to society’s growing realisation of the indisputable necessity of securing links all across the peninsular.

Malaysia’s telecoms industry faced one of its lowest points in history during World War II which culminated in the occupation of Japanese forces on Malayan soil in 1946. This period not only witnessed the large scale decline in economic enterprises, but it also rerouted the telecommunications sector towards all activities related specifically to the war effort. In the middle of this political turmoil, the Post and Telegraph Department was split into two and thus resulted in the establishment of the Telecommunications Department.

In 1985, the Telecommunications Department unveiled the ATUR 450, the first wireless telephone system in the country, signifying the arrival of mobile services to Malaysian shores. This department oversaw industry operations until 1987, when its services were transferred to Telekom Malaysia Berhad (TMB), the country’s current incumbent telecommunications service provider.

With the eventual creation of the Malaysian Communications and Multimedia Commission (MCMC) as a regulatory body, the industry began to transform from TMB’s monopoly over cellular, fixed line, and overseas telephone services to the more liberal and transparent infrastructure that encourages competition and efficacy. Between 1989 and 1995, Celcom (Malaysia) Sdn Bhd, Maxis Communications Bhd (formerly Binariang), Digi Telecommunications Sdn Bhd and TIME dotCom Bhd had launched their services and at the time, represented the top five telecoms operators in the market segment that were made up of private and public holdings.

Roles of the MCMC 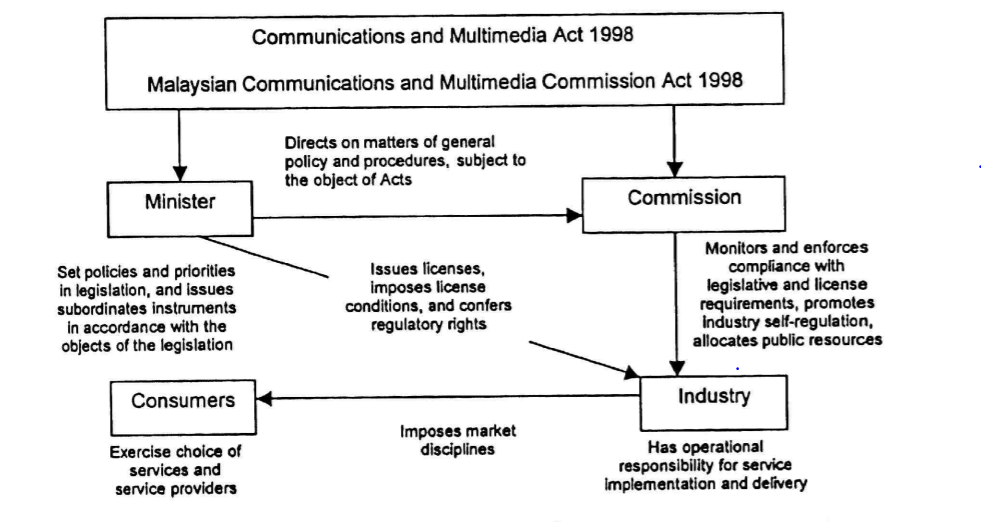 Although these five operators were awarded licenses to be able to compete in the growing market, TMB remained the dominant service provider as a result of its incumbency. At the beginning of the new millennium, TMB owned 99% of Malaysia’s fixed telephone lines that were in service, which accounted for 4.574 million out of 4.628 million fixed lines in the market.

Not long after, aftershocks of the Asian financial crisis as well as the surge in the number of mobile phone users proved to be challenging to the growth of the fixed line market. From the end of 1996 to the end of 2001, the mobile penetration rate jumped from 7.1% to 31.1%, owing strongly to the government initiatives and policies that were put in place in order to ensure its success.

Penetration rate for fixed and cellular 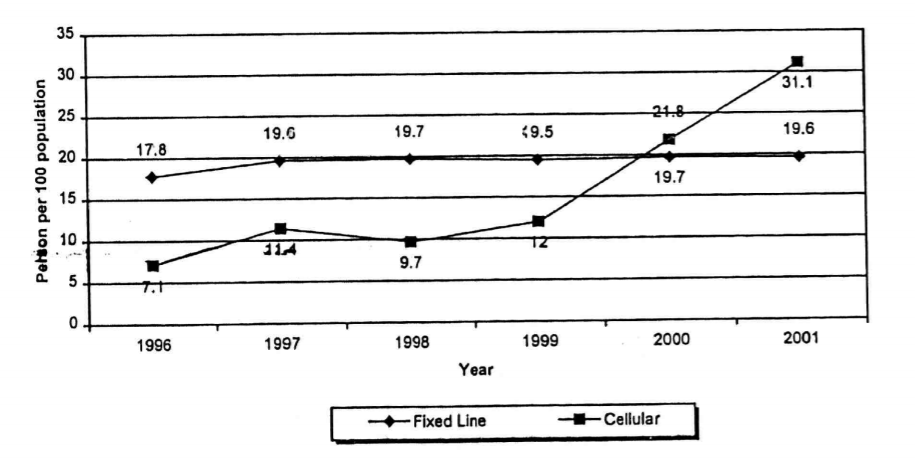 This being said, the rapid industry growth coupled with the introduction of high-tech value-added services, not to mention the 3G, 4G and soon to be 5G networks, have clearly propelled the country forward in terms of innovation and market proliferation.

The current telecoms landscape in Malaysia

In the last decade, a number of significant changes occurred in the Malaysian telecoms industry that set the tone for the technological revolution we are experiencing today. The government has always supported the notion that the telecoms environment in the country has been considered overcrowded at times, in particular the mobile sector. As a result, a number of significant mergers took place such as the merger between Telekom and Celcom which later saw the creation of Axiata Group, and the acquisition of Time dotCom’s mobile unit by Maxis, effectively lowering the number of operators from five to three.

From 2012 onwards, the environment was competitively dominated by three major mobile operators; Celcom, Digi and Maxis, and the incumbent Telekom Malaysia. As 3G licenses began to be provided, the boost in the market witnessed the appearance of a fourth telco, U Mobile, after it surprisingly received its own 3G license. In 2018, the telecommunications sector revenue had increased 3.7% to RM35.86 billion from 2017, with mobile operators contributing a huge chunk equivalent to 64% of the total revenue. The remaining 36% was generated by fixed service providers.

Looking specifically at the Average Revenue per User (ARPU) for the three main service providers for 2018, Maxis blended ARPU was the highest with over RM50 per month across a five year timeline due to its increased focus on high value consumers.

As for Celcom, its blended ARPU came up to RM48 per month in the same year as a result of simplified product offerings and high customer focus. Like its peers, Celcom plans to centre its strategy on providing better value-added and bundled services.

Lastly, Digi’s blended ARPU saw a decrease to RM41 per month compared to RM43 per month in 2017. This was largely caused by higher entry level take up but has managed to increase Digi’s subscriber base nonethless. 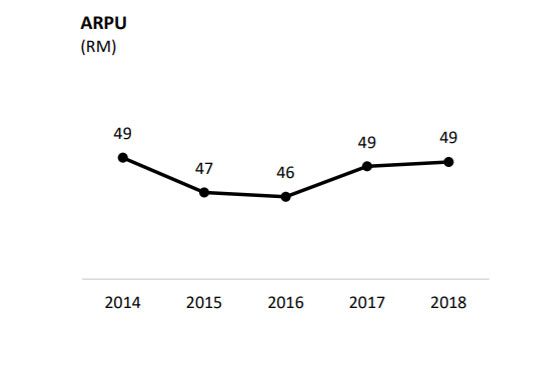 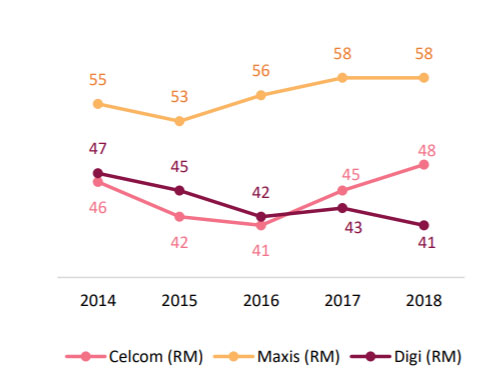 Based on the above, mobile service providers clearly organise their ARPU via different strategies such as utilising services that are of higher value and maintaining a strong level of customer focus. Service providers who have adopted and implemented the “Know Your Customer (KYC)” mantra are able to retain as well as attract more new subscribers through consumer management and tailor-made bundled packages to suit a variety of customer needs.

As of 2018, the Communications and Multimedia (C&M) Industry constituted 8% of the Malaysian Stock Exchange (Bursa Malaysia) which is the total market capitalisation of RM1,700.37 billion.

When it comes to Malaysia’s 5G readiness, the demand for continuous and seamless connectivity is growing at an accelerated rate. The 5G phenomenon is seen as not just a generational step, but as a way for Malaysian society to advance together towards a more connected future by bridging the digital divide between urbanites and those who live in more rural areas of the country. Through the application of 5G technology, Malaysia will witness the greater proliferation of industry application and a strengthened delivery optimisation for multiple sectors like automotive, agriculture, healthcare, manufacturing, education, entertainment and many others.

In order to expedite Malaysia towards the next phase of its digital transformation, a number of initiatives have been put in place by governmental bodies to catalyse growth and expansion in the tech and telecommunications sector. For example, it was recently announced that in 2019 Maxis has committed itself to a Capex of an extra RM1 billion over the next few years for the provision of new digital services. Additionally, the MCMC will launch its National Fiberisation and Connectivity Plan (NFCP) offering high quality, cost-effective and resilient digital connectivity for the welfare of Malaysians all over the country.

In the MCMC’s most recent Industry Performance Report, Chairman Al-Ishsal Ishak said, “There is much to be done to enable the next generation connectivity and engender an array of digital services that can address the different needs of Malaysians and the economy. I am cognisant of the fact that many challenges lie ahead of us, as technology is relentless and disruptive across all sectors. Nonetheless, through industry collaboration I am hopeful that any form of change or challenges that await us in the horizon, can be translated into positive impacts to the country.”