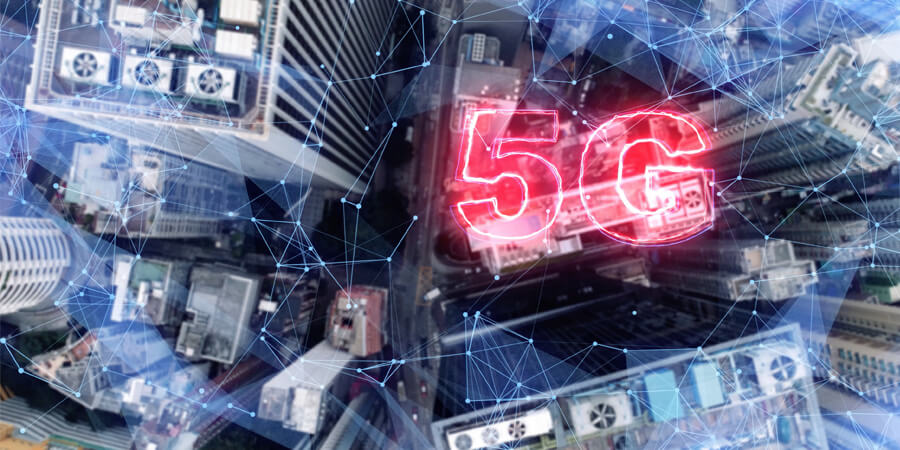 The most recent study by US-based think tank, International Data Corporation (IDC), suggests that earnings from 5G services in Asia Pacific will increase by the compounded annual growth rate of 137% in 2026, from $106 million last year to $8 billion in the five-year period, thanks to the ever-growing demand for this technology by various industries.

The increasing adoption of digital applications requiring high-data and high-bandwidth usage within the households and enterprises is prompting greater improvement to the existing fixed-line network infrastructure.

While South Korea and China continue to outpace their regional neighbors in the 5G race, Singapore and Thailand are also well on track to reach their target, while other emerging markets in Southeast Asia have also ramped up their games.

In a press release, Bill Rojas, adjunct research director for IDC Asia/Pacific, said, "It will take the telecom industry three to five years to fully develop 5G enterprise services, and equally the same amount of time for leading enterprises to conduct proofs of concept and trials before committing their business operations to depend on 5G. But the early trend is that private networking has received the most attention in all markets in the region due to the potential benefits for industries. Network slicing will be deployed initially in factories, warehouses and Smart Airports, but eventually in outdoor settings such as Smart Ports, Smart Stadiums, Smart Campuses and transportation hubs."

IDC’s report said that 5G FWA will serve both as a temporary solution in certain markets, including the Philippines, although it will also be a substitute for fiber broadband access, which could not reach specific areas. Aside from the Philippines, markets seen to be deploying 5G FWA (Fixed Wireless Access) include Australia, New Zealand, Hong Kong, Malaysia, Thailand, Vietnam, and India.

As of now, challenges still lie ahead in terms of 5G deployment in the region, especially for emerging markets that continue to experience a digital divide. To face such challenges, in the Philippines and Malaysia, for example, governments are becoming more involved in their 5G projects.

Here are what some Asian markets have come up with so far in terms of their 5G rollout.

Thailand is among the first to roll out 5G in Asia-Pacific. It first deployed 5G services in early 2020, with major telecom operators AIS, TrueMove H, and dtac at the forefront.

Now, the country is seen to be moving farther ahead of its regional neighbors in terms of 5G deployment, thanks to the government’s push to ensure 5G availability in the country. The latest data from Ookla shows that Thailand’s 5G availability has already reached 24.6%, with its capital Bangkok accounting for 30.1% of it.

The country’s largest telco player, AIS targets to deliver 5G connectivity to 85% of its population by late 2022, and it also aims to expand its 5G network to all of Thailand’s 77 provinces.

The telecom providers, True and dtac have newly merged under the entity NewCo, which is said to be capable of delivering stronger competition to AIS, and investing in 5G.

Malaysia’s 5G rollout has long been overdue, until recently when the six telecom leaders have reached an agreement to invest in the state-backed 5G wholesaler DNB.

The Malaysian government established Digital National Berhad or DNB to put up a single wholesale network early in 2021. However, this was delayed by political and commercial issues towards the end of last year.

DNB is the only entity that’s allotted the 700MHz, 3.5GHz and 26/28GHz spectrum for 5G use. Other telecom providers are not allowed to deploy their own networks.

The telcos refused to accept this regulation, which prolonged the process until authorities eventually reached an agreement with private telcos in March. The government offered them a 70% stake in DNB to guarantee their position in the 5G roll-out and protect them from being overcharged for wholesale capacity.

The regulator said that telecom providers included in the 5G deal have completed four of the five phases of their technical tests.

Only a few cities in Malaysia are covered by 5G, including selected areas of Putrajaya, Kuala Lumpur, Johor, Cyberjaya, and Selangor.

MCMC CEO, Datuk Mohd Ali Hanafiah Mohd Yunus saw this as a positive development, and that, most likely, they will see 5G services being rolled out in September.

DNB previously stated that its goal was to achieve 80% coverage across the country in the next two years. Most of Malaysia will see necessary infrastructure by 2023, attracting foreign tech giants including Vodafone, Rivada Networks and Intel to penetrate the market.

Singapore is fast emerging as one of the leaders in the 5G game in the region.

Some of these projects involve the use of 5G in augmented reality, medical technology, and the maritime sector.

In a statement, IMDA’s Chief Executive, Lew Chuen Hong, said, “Singapore will continue to push the boundaries of innovation through frontier technologies such as 5G. We are excited to work with our industry partners to unlock the real impact of 5G. We look forward to seeing new and exciting ways 5G will benefit our businesses and consumers”.

According to IMDA, under its 5G Innovation Programme, S$30 million will be allotted to speed up the adoption and commercialization of 5G technology.

IMDA also announced that Singapore will reach the goal of having full 5G standalone (SA) coverage over its anchorages, fairways, terminals, and boarding grounds by mid-2025. It said that 5G coverage in Singapore’s current port waters will allow for the establishment of what it says is “the world’s first public and largest 5G Maritime testbed to trial, innovate and commercialize Maritime 5G use-cases over the next decade.”

These developments take place after Singtel announced that it has reached more than 95% standalone 5G coverage across the country, three years ahead of the government’s target.

Singtel also announced in July that its 5G network now spans 1,300 outdoor sites and delivers signal in over 400 buildings and train tunnels.

Singtel’s rival, StarHub, meanwhile, has said that it is almost reaching nationwide coverage, which it expects to be completed in the coming months. Most populated areas can already receive 5G signal. It recorded 1.5 million postpaid mobile subscribers early in 2022, and among these, 400,000 were using 5G handsets and could access 5G connections.

Indonesia is seen to be one of the fastest growing telecommunications markets across the globe, thanks to the increase in both mobile and fixed broadband usage. According to a 2021 report by Google, the overall digital economy in the country is estimated to double to $146 billion in 2025.

However, it’s seen to still be facing an uphill battle before it starts implementing its 5G project.

Jakarta recently presented Indonesia’s Digital Roadmap 2021-2024, which includes four strategic sectors. These are digital infrastructure, digital government, digital economy, and digital citizens. It also covers six targets for accelerating the country’s digital transformation, which include the development of safe digital infrastructure, as well as transforming the country into a tech producer by developing 4G and 5G nationwide.

So far, Indonesia’s telecom giants’ focus is on the expansion of 4G coverage in the country, and they’re in no rush to push for 5G deployment.

According to a forecast by Fitch Solutions, “LTE remains under-utilized at present and there are over 3,000 rural towns and villages that are yet to be served by any carrier as of Q1 2022. Operators will look to establish basic 3G/4G services in such regions while developing their 5G networks in major urban centers of Java and Sumatra. However, sustained price competition among principal and alternative operators are key downside risks to profitability and long-term service development.”

According to Indonesia Telecoms Industry Report, 5G mobile subscribers are expected to account for 43.5% of all subscriptions in Indonesia by 2027, while 4G will make up about 50.6% of all connections, and 2G and 3G will account for about 2% if not discontinued earlier.

The Philippine’s new administration laid out plans for a digital economy in June as its newly elected president is looking into more opportunities to fast-track the buildup of the country’s digital ecosystem.

Aside from its growing 5G capacity and welcoming of new telecom players, the country is also awaiting the launch of satellite connectivity, which is expected before the end of the year.

Amid these latest developments, the Philippines’ two telco giants, the PLDT Group and Globe Telecom, are also beefing up their offerings.

As of the first half of 2022, PLDT’s wireless unit, Smart, has deployed around 77,100 total base stations nationwide, supporting its 3G, 4G/LTE and 5G customers. Among these are 7,300 5G base stations. Smart has rolled out 2,500 additional 5G base stations across the country, compared to a year ago.

Meanwhile, its rival, Globe Telecom, is stepping up its 5G rollout across the country with the deployment of more than 900 cellular sites in the first six months of 2021. Its 5G network outdoor coverage is now at almost 97% of the regional capital of Metro Manila, and 86% spans across key cities in the Visayas and Mindanao islands.

Meanwhile, newcomer DITO Telecommunity is reported to be continuously developing and deploying its standalone 5G network nationwide. DITO will however, need more time and resources for the deployment of its network to deliver 5G services to its consumers.

China continues to dominate the global 5G race, and it’s been expanding its 5G infrastructure at a fast rate. Latest data from the Ministry of Industry and Information Technology (MIIT) shows that as of the end of July, China had put up approximately 1.97 million 5G base stations, with all prefecture-level cities and counties as well as 96% of all towns equipped with 5G network coverage.

MIIT data also suggests that the number of 5G mobile users in the country had reached 475 million by the end of July, a net growth of 120 million compared to the previous year.

This progress is backed by the highly developed research and development capability that local companies have accumulated, with Huawei continuing to be the largest 5G patent holder across the globe.

According to the 2022 World 5G Convention, telecom operators have cumulatively invested about $59.4 billion in 5G.

The government aims to have 560 million 5G mobile subscribers by the end of 2023 and increase the penetration rate of 5G technology among major industrial enterprises to 35% in that period.