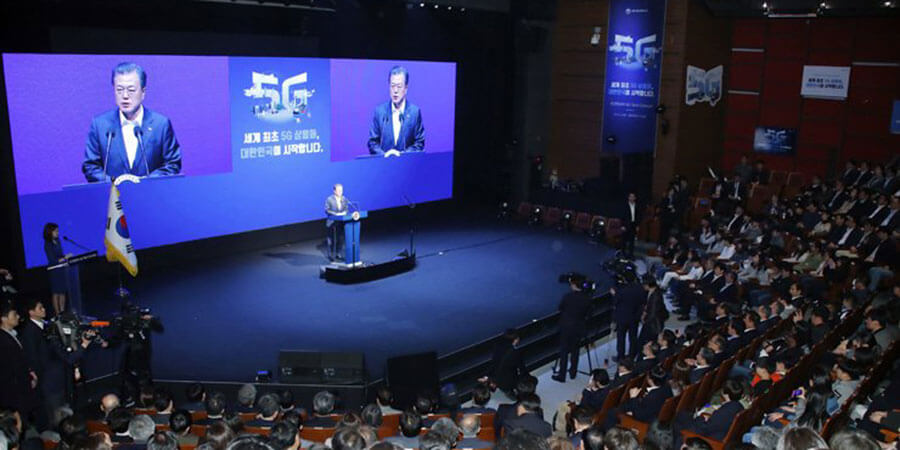 South Korea, a beacon of technological prowess and vision has stepped up its effort to establish itself as the global leader in 5G by announcing plans to invest $26bn in its 5G ecosystem.

President Moon-Jae outlined the South Korean government plans and proposal at the launch of 5G services for consumers at Olympic Park in Seoul. It will make the investment over a period of 4 years.

In addition to this, it was disclosed that investments will span a variety of segments, such as autonomous driving, digital healthcare, smart cities and smart factories.

South Korea’s progressive leader vowed that the country will create the world’s best 5G ecosystem and will attain 15% of the 5G market share by 2026, which it believes will make it the market incumbent.

Moon-Jae revealed that the government will reduces taxes on network construction by up to 3 per cent in an effort to facilitate and support the nationwide rollout of 5G infrastructure.

Market leader SK Telecom said it now has 38,000 5G base stations, while KT claims 30,000 and LG Plus 18,000, with the majority deployed in the country’s six largest cities, including Seoul, Busan and Daegu.

Specific initiatives targeted by the government as part of its push include introducing self-driving shuttles in major cities by 2020; 1,000 5G-powered buses in provincial municipalities in five years; and developing emergency medical treatment services by 2021, KH said.

All-told, the president predicted the global 5G market would be worth KRW1.16 trillion by 2026, around double the size of the world’s semiconductor industry.