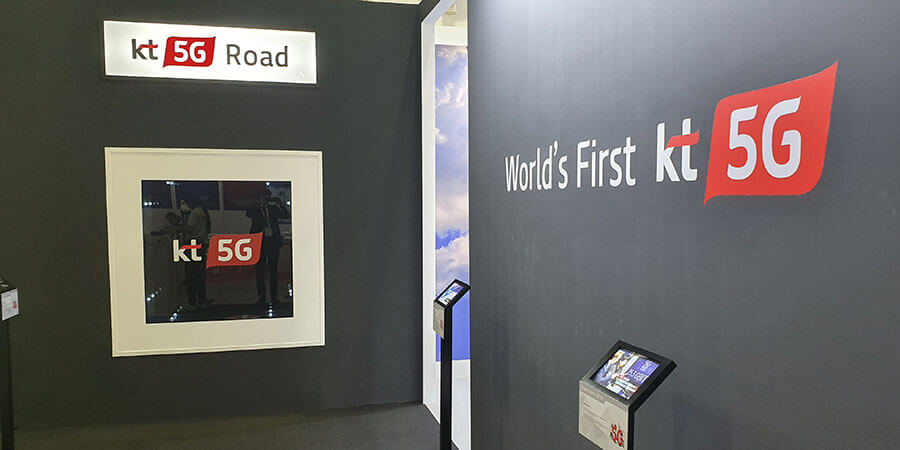 KT and its satellite-operating subsidiary KT SAT Co. have set up their exhibition booths for this year’s ConnecTechAsia, which brings together the region’s three major technology, media and telecommunications (TMT) events – BroadcastAsia, NXTAsia, and CommunicAsia – under one roof at Suntec Singapore and Marina Bay Sands from June 18 to 20.

KT SAT is participating in CommunicAsia for the sixth straight year to share its vision of transforming the company into a global satellite business platform using breakthrough technologies such as 5G, blockchain and quantum cryptography.

“After being the world’s first pioneer to bring 5G into a reality, South Korea’s KT is focusing on developing innovative 5G technologies and services, such as AI, AR, SKYSHIP and satellite communications, showcased here at ConnecTechAsia,” said Yoon Jong-Jin, Senior Executive Vice President of Public Relations at KT Corporation. “In the new 5G era, KT will transform from the largest national network operator into the world’s leading global intelligence platform by collaborating with innovative partners around the globe."

KT is the first provider in the world to offer unlimited data plans without a speed cap and a time period for its next-generation network services, allowing customers to get the best of 5G’s super-fast and ultra-low latency connectivity. 5G is up to 20 times faster than the current LTE or 4G networks, offering extremely low latency and connecting more devices at once.

KT’s truly unlimited data plan is vital for 5G users to enjoy immersive media such as cloud-based streaming games, AR/VR and other key services such as autonomous driving. The South Korean government has pledged to support the completion of the full nationwide 5G network by 2022 and raise more than 30 trillion won to invest in the world's best 5G ecosystem.

Visitors to ConnecTechAsia can rent a tablet to take an AR docent program for the three zones (5G History, 5G SKYSHIP, and AI Hotel) of KT’s exhibition booth, dubbed “5G Xperience.” Under the theme of “Do Everything with KT 5G,” the company is showcasing its 5G milestones and achievements since its Chairman Hwang Chang-Gyu first laid out the company’s vision for the world’s first commercial 5G network at the MWC in 2015 and again in 2017.

KT’s 5G History Zone presents the Korean telecom’s journey to pioneer and develop the next-generation wireless communication technology. It introduces 5G trial services at the 2018 PyeongChang Winter Olympics and 5G commercial launch in April, both the first in the world.

The 5G SKYSHIP Zone showcases a next-generation platform specialized for emergency search and rescue, combining 5G technology with an unmanned airship and drones. Using AR, the zone demonstrates the operations of a 360-degree camera installed on the Skyship, and other innovative technologies such as the “Skyship Drone” and “Skyship Robot.”

“As a specialized satellite enterprise with more than 50 years of experience under our belt, we are endeavoring to develop new growth engines for our satellite business,” KT SAT CEO Hahn Won-Sic said. “We are determined to go beyond our transponder business and take a great step forward to serve as a global platform provider.”

Satellite-5G connection is a new telecommunication technology interworking between a 5G core network and 5G Radio Access Network (RAN) by satellite instead of fiber optic cables. KT SAT will exhibit the connection between its satellite in orbit and KT’s 5G network, a technology capable of providing uninterrupted 5G services to ships and islands, and its latest global technology standards.

The blockchain-based service permits only private blockchain key holders, such as ground terminals and ship owners, to remote-monitor the footage of the CCTV cameras installed on ships. Unauthorized persons are denied access to the CCTV. The launch of a pilot service is scheduled for the second half of this year.

KT SAT, Korea’s only satellite service provider, is aiming to become the seventh-largest global operator by 2025. Southeast Asian businesses are at the top of the company’s list of potential customers. With KOREASAT-7 and 5A respectively positioned at 116 degrees east and 113 degrees east, and both placed high above Indonesia, KT SAT is prepared to gain a substantial foothold in Southeast Asia.

KT SAT is also well placed to provide services to other regions, with KOREASAT-5A’s coverage extending from Korea’s East Sea to the Arabian Sea. Further, the satellite’s MVSAT service can be optimized for specific maritime areas. To expand its service areas, KT SAT is also seeking collaboration with foreign satellite operators. By launching a roaming service in cooperation with foreign operators, it expects to provide satellite service in unexplored markets.