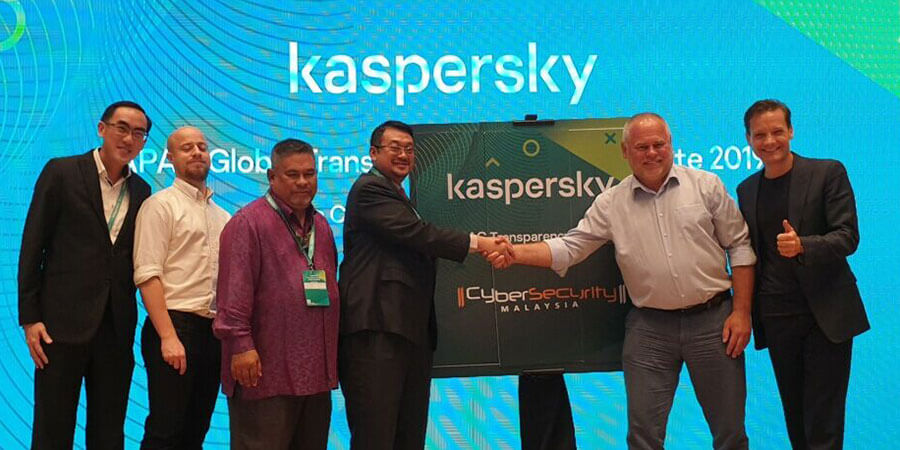 In line with its drive towards building trust in the cybersecurity industry, Kaspersky announced the opening of its first Transparency Center in Asia Pacific, to be hosted by CyberSecurity Malaysia - Malaysia's national cybersecurity specialist agency. The company's third code review facility will be located at Menara Cyber Axis, Cyberjaya, alongside key cyber-related government agencies in the country.

Like its counterparts in Zurich and Madrid, the Transparency Center in Malaysia will serve as a trusted facility for the company's partners and government stakeholders to come and check the source code of Kaspersky's solutions. The new center will also function as a briefing center where guests will be able to learn more about Kaspersky's engineering and data processing practices.

Commenting on the opening, Eugene Kaspersky, CEO of Kaspersky, said, “It's great to be here in Kuala Lumpur - in the heart of the Asia-Pacific region - to announce the opening of our third Transparency Center. Here we intend to show customers and government stakeholders that our products are 100% trustworthy and ensure the highest level of cybersecurity protection. The launch also proves that the activities we planned under our pioneering Global Transparency Initiative remain on track.”

“We are excited to unlock the doors of this digital hub to let users experience the services and capabilities of Kaspersky's cybersecurity technology here in our region. As a paradigm shift for the cybersecurity industry, this facility - the first in the region - will be located at the center of the future cybersecurity hub in Cyberjaya, all thanks to the kind cooperation of CyberSecurity Malaysia. We are grateful for their trust and commitment towards us as this third-party validation proves that private companies and public agencies can team-up to better protect users from cybercrime,” comments Stephan Neumeier, Managing Director for Asia Pacific at Kaspersky.

The new center is being opened as part of the company's Global Transparency Initiative - a brainchild of Kaspersky which aims to address the growing demand from partners and government stakeholders for more information on how its products and technologies work. The center will open for its first visitors early next year.

Margrith Appleby, General Manager of ANZ comments, “This new facility also aims to address the growing demand from our partners for more information on how our products and technologies work. We understand the shifting threat landscape and want to work with partners who look into beefing up their cybersecurity capabilities.”

Meanwhile Dato' Ts. Dr. Amirudin Abdul Wahab, CEO of CyberSecurity Malaysia said, “As the threat landscape continues to evolve in Malaysia and in the region, we believe that it is crucial for private companies such as Kaspersky and government agencies to build trust and mutual cooperation. Kaspersky's willingness to open their doors and data processes further shows that they have nothing to hide. As a third-party entity, we also share their insights and concerns to make the cybersecurity industry better. We really hope that our partnership will be an example for more governments and private entities in exercising fairness and transparency for the benefit of our citizens and the cybersecurity industry.”

Since the company's announcement in October 2017, Kaspersky's Global Transparency Initiative has been demonstrating good progress. In particular, the company started relocating customer data storage and processing infrastructure for European users from Russia to Zurich, Switzerland, to be completed by the end of 2019.  Additionally, it has opened two Transparency Centers in Europe - in Zurich in November 2018 and Madrid in June 2019. The Spanish Center also serves as a briefing center for key company stakeholders.

Furthermore, it has successfully completed the Service Organisation Control for Service Organisations (SOC 2) Type 1 audit. The final report, issued by one of the Big Four accounting firms, confirms that the development and release of Kaspersky's threat detection rules databases (AV databases) are protected from unauthorised changes by strong security controls.

Lastly it has been developing its Bug Bounty program. Since the announcement of the program's extension, the company resolved 66 bugs reported by security researchers and awarded almost $45,000 in bounty rewards. The company also supports the Disclose.io framework which provides Safe Harbor for vulnerability researchers concerned about potential negative legal consequences of their discoveries.