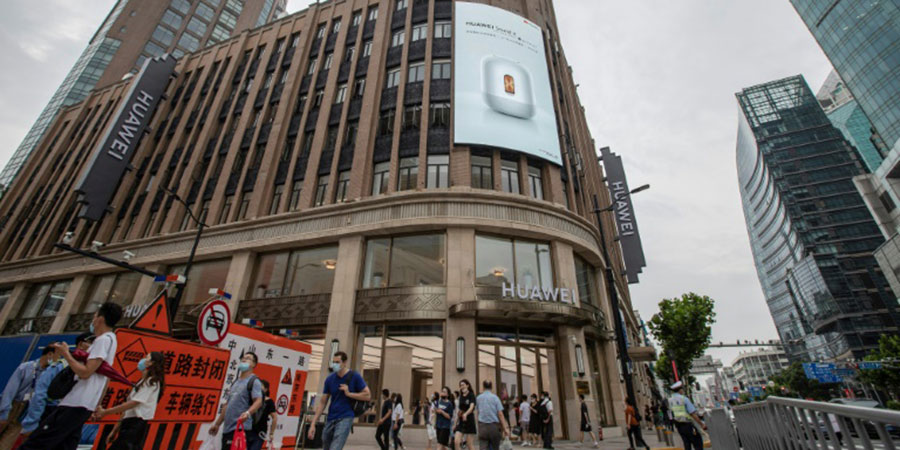 Chinese telecom giant Huawei opened its second global flagship store in Shanghai, part of plans to strengthen its brand in its core Chinese consumer market as it faces headwinds overseas.

Hundreds of face mask-wearing customers queued up to enter the 5,000-square-metre (54,000-square-foot) store on the city's busiest shopping street and directly across from a retail outlet of rival Apple.

Company representatives said Huawei intends to open several more such stores in China in the coming year to showcase its smartphones and other consumer tech, plans that they said were conceived before the US government launched a worldwide campaign against the firm about 18 months ago.

The Trump administration accuses Huawei of stealing American trade secrets and says its telecommunications equipment could be used by Beijing for espionage.

Washington has essentially banned Huawei from the US market, urged other countries to shun its network gear, and is seeking to cut it off from global semiconductor suppliers.

The international rancour was on 80-year-old retiree Chen Yannian's mind as he shopped for a new handphone.

"To be honest, with the United States suppressing Huawei, we must support Huawei," Chen said.

He also cited the ongoing detention in Canada of Huawei executive Meng Wanzhou, daughter of company founder Ren Zhengfei. She is fighting a US extradition request related to charges that Huawei violated Iran sanctions.

"America is not only suppressing Huawei, but all of China," he said. "If we can, we should try our best to support patriotism, right?"

Huawei had a commanding 42.6% share of China's total smartphone market in the first quarter of 2020, according to the International Data Corporation (IDC).

But it said Huawei could face stiffening competition in the growing 5G phone segment from cheaper rivals.

The US also has barred Huawei from using Google's Android operating system, meaning the company now faces the challenge of building a following for its home-grown alternative system HarmonyOS in a world dominated by Android and Apple's iOS.

Like its rivals, Huawei revenue also has been hit by the pandemic, growing just 1.4% in the first quarter, down from 39% growth in Q1 2019.

Huawei denies the US security-threat allegations, saying Washington has never provided evidence and that American pressure is motivated by fear of falling behind rising Chinese tech companies.

Last month, Huawei said that US efforts to cut off access to semiconductor supplies could threaten the company's "survival".