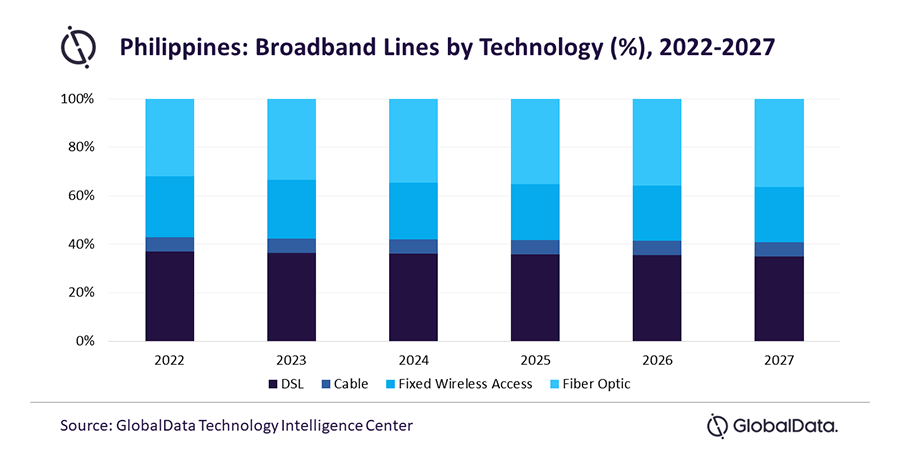 The total fixed communication services revenue in the Philippines is expected to increase at a compounded annual growth rate (CAGR) of 2.7% from $5.2 billion in 2022 to $6 billion in 2027, forecasts data and analytics firm GlobalData.

It cites strong growth in the fixed broadband segment as a key to this increase.

GlobalData’s Philippines Fixed Communications Forecast (Q2 2022) reveals that the fixed voice service revenue will decline at a CAGR of 2% over 2022–2027, owing to the drop in circuit-switched      subscriptions and decline in fixed voice average revenue per subscriber (ARPS) levels as a result of the increasing preference for mobile/internet-based communications and free voice minutes bundled as a part of operators’ fixed bundled plans.

While DSL lines accounted for the largest share, i.e., 37% of the total fixed broadband subscriptions in 2022, it is however expected to gradually drop over the forecast period. Fiber broadband lines, on the other hand, will increase at a robust CAGR of 8.8% over the forecast period and go on to account for over 36% of total fixed broadband lines in 2027. This is supported by the government and operator investments in fiber network infrastructure and FTTH service expansions.

Vaidya concludes: “PLDT will lead the fixed voice services segment in terms of subscriptions through 2027, supported by its strong position in the growing VoIP service segment. The operator will also top the fixed broadband services market by subscriptions, supported by its strong position in DSL and FTTH service lines. The operator plans to invest a CAPEX of around PHP85 billion ($1.4 billion) in 2022 and seeks to upgrade and expand its fiber broadband network and gain from wider coverage of its FTTH services.”