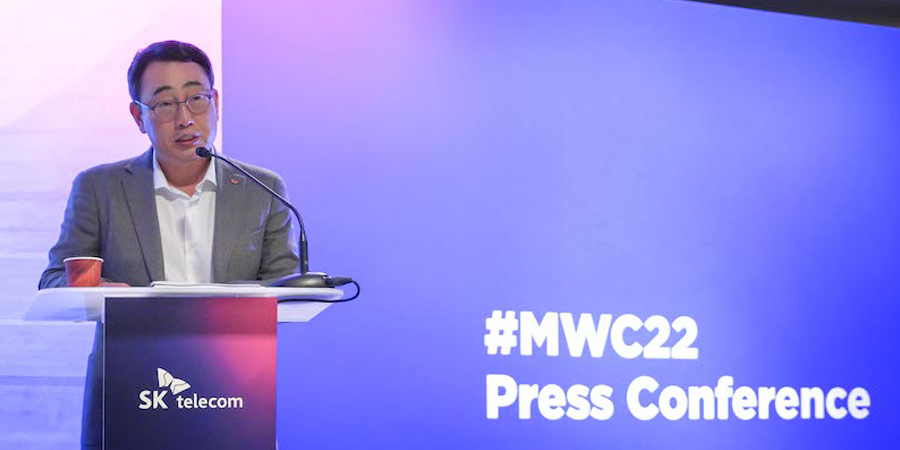 SK Telecom (SKT) held a press conference at MWC Barcelona 2022 to announce that  the company will enter the global market with “Next Big Tech”, which refers to its three key future leading technologies namely metaverse, AI semiconductor and quantum cryptography.

SKT’s CEO Ryu Young-sang, who hosted the event said, “2022 will mark the first year in which ‘Next Big Tech’, developed with our extensive know-how accumulated over the three years after commercializing the 5G network, makes inroads into the overseas markets.”

SKT will aggressively expand its global presence by launching its metaverse service Ifland in 80 different countries this year.

In Korea, Ifland is rapidly migrating people’s real lives into the virtual world. It has become a popular venue for social gatherings as well as a platform for businesses seeking new ways to communicate with their customers.

To shape Ifland into an innovative global service, SKT will further enhance user convenience through service upgrades including opening up of its platform to enable users to provide diverse content, and creating a marketplace applied with crypto technologies (NFT/blockchain).

Going forward, the company plans to evolve Ifland and AI Agent into a single AIVERSE service by interconnecting content, economic system, and back-end infrastructure of the two services.

Growing by 44% per year, the global AI semiconductor market is expected to reach KRW 40 trillion by 2025.

Early this year, the company secured a bridgehead to advance into the global market by establishing Sapeon Inc. in the US, through joint investment with SK Square and SK hynix.

This year, SKT will work closely with Sapeon Inc. to apply its semiconductor chip to many different industries including manufacturing, security, media and automotive.

Through these efforts, SKT expects Sapeon Inc. to become a company with a cumulative revenue of KRW 2 trillion and an enterprise value of KRW 10 trillion by 2027.

SKT announced its plans to strengthen its competitiveness in the field of quantum cryptography, which is being applied to wider areas due to the increased importance of security brought by the diversification of smart devices.

Together with ID Quantique, a global leading quantum technology company it acquired in 2018, SKT has secured world-class security technologies and created various use cases in Europe, North America and Asia.

In addition, the company is leading the quantum cryptography ecosystem in Korea by applying QKD to 221 kilometers of its 5G backbone network in 2019, and launching the world’s first QRNG-powered 5G smartphone “Galaxy A Quantum” with Samsung Electronics in 2020.

Based on strong technological capability and market competitiveness, SKT has secured over 250 customers and partners, more than doubling its sales after the acquisition of ID Quantique.

This year, the company plans to increase sales of the existing products such as QRNG and QKD, while expanding into new areas such as blockchain and quantum cryptography solutions.

“SKT will become the world’s number one quantum cryptography company by partnering with companies in telecommunication, security and IT industries,” said CEO Ryu Young-sang.

SKT will continue to enhance its competitiveness in mobile & fixed telecommunications based on its 5G leadership; and grow the media business by expanding its platform competitiveness to the overall value chain including content, T commerce and advertising.

In the enterprise business, the company will keep expanding the scale of its data centers, while advancing 5G MEC-based cloud services, AI-based IoT and smart factory. It will also promote the growth of the AIVERSE business by evolving T Universe, metaverse and AI agent into new AI services that provide a new level of experience, while actively pursuing its connected intelligence business to realize seamless connectivity for future devices like UAM vehicles, robots and self-driving cars.

In particular, SKT announced that it will promote robot-related business in full swing by leveraging its rich stock of AI technologies. The company decided to invest in CMES, a leading AI vision robotics company, to jump into the AI robot-based logistics business.

Furthermore, CEO Ryu announced that AI will be applied to SKT’s overall ESG activities under the “Barrier Free AI” project, which aims to create a barrier-free society with AI.

SKT is using AI to better support seniors and the socially weak. For instance, the company is providing “Goyohan M”, a service that facilitates communication between deaf taxi drivers and passengers based on voice AI and vision AI; and ‘Now I See,’ an app built with voice AI to enable the visually impaired to identify objects and letters via voice.

The increased adoption of Sapeon, which reduces power usage, coupled with the expansion of Ifland, which reduces the use of diverse resources by replacing the real world, is expected to help boost SKT’s efforts in achieving net-zero emissions.

“With the launch of metaverse, AI semiconductor and quantum cryptography in overseas markets, we will expand our global presence to maintain leadership into the next-generation ICT market,” said Ryu Young-sang, CEO of SKT.  “We will continue to introduce breakthrough technologies and services that can create differentiated value in the global market.”