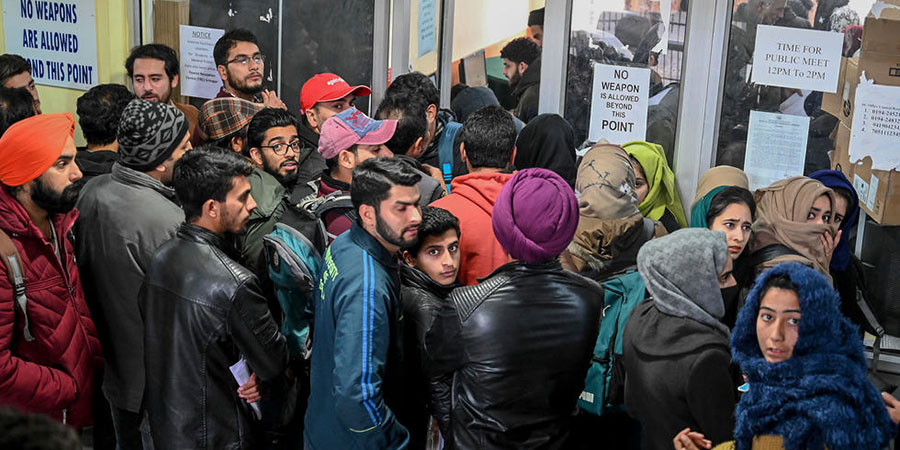 In remote Indian Kashmir people have been offline since August, queuing for hours to pay bills or using government "internet kiosks". As protests rage in other areas of India, it's something people outside the Himalayan region are also getting a taste of.

Indian authorities, who according to activists lead the world when it comes to cutting the internet, snapped Kashmir's access when New Delhi scrapped the region's seven-decade-old autonomy.

In the past two weeks of violent protests across India against a new citizenship law, mobile internet has been cut in swathes of the country and fixed-line access in places too.

In Kashmir, a security lockdown imposed in August has been eased and some cellphones now work again. But hundreds of political leaders and others remain locked up, and there is no internet.

In the main city Srinagar, Mohammad Irfan waited in a long line inside a large hall run by a state-owned telecommunications firm.

"I would (previously) do this in my spare time or even while walking (on my cellphone)," Irfan said. "But now I'm standing in this queue for about an hour each time to pay my phone bill."

Flooded by complaints from businesses and people unable to do all the myriad things they used to online, authorities recently set up the internet kiosks.

There are around a dozen of them for the region's seven million inhabitants, and people can only use the computers, when they function, for 10 or 15 minutes.

People have to show their identity details and say exactly what they want to go online for, including what websites they intend to visit, and why.

Visiting social media sites is not allowed. Officials pace behind the terminals, watching the screens closely and telling people to move on when they're done. Users suspect that every click is tracked by software too.

"I should be preparing for my exams at home," said student Mubashir, who travelled more than 100 kilometres (60 miles) through snowy Kashmir to a kiosk in Srinagar.

"Instead, I am waiting here to obtain my registration card which is available only online.

Mobile phones were only restored in October, but only ones with a contract and only for calls, not for data. WhatsApp is even deleting some accounts due to inactivity.

Even civil servants need permission to use the internet for government business, and in a dedicated office.

Fixed-line cable internet services have been restored to a select group of businesses like luxury hotels and some IT businesses.

But they have to ensure only staff use it, and not for "social media or political activity" or to create wifi networks, the rules say. USB ports must also be disabled.

"We had to... agree to allow security forces to inspect our infrastructure anytime they want," a software firm owner told AFP on condition of anonymity.

Authorities recently restored some incoming text message services, so users can get pass codes that are used widely in South Asia for online purchases and banking.

But this is not much use without internet access as well, and people and businesses are reeling from being cut off from the online world enjoyed by the rest of India.

"My company has not earned a single penny since the internet shutdown four months earlier," Ishfaq Mir said of his IT consultancy Sow Technology.

Across Kashmir, a survey by a leading local traders' group said the losses suffered by the economy since the shutdown on August 5 have reached $1.7 billion.

About 100,000 jobs have being shed, half of them in the crucial tourism sector, Kashmir Chamber of Commerce and Industry figures show.

Losing online access has also affected the healthcare sector, cutting off the ability of patients and doctors to conduct consultations online.