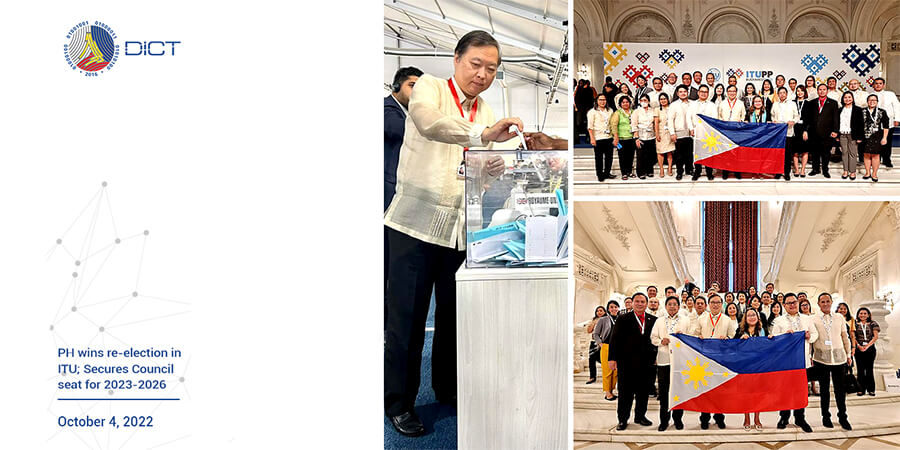 The Department of Information and Communications Technology (DICT) has announced that the Philippines was re-elected to the International Telecommunications Union (ITU) Council on October 3 in Bucharest, Romania.

One hundred and ninety-three member states of the ITU selected 48 states to lead the Council. The Philippines is among the 13 states selected from Region E (Asia and Australia), along with Australia, Bahrain, China, India, Indonesia, Japan, Korea, Kuwait, Malaysia, Saudi Arabia, Thailand and the United Arab Emirates.

Represented by DICT, the agency said that the country commits to working towards the fulfillment of the ITU’s mandate to make the digital future inclusive and more accessible for everyone, especially in developing countries.

“The DICT looks forward to working with all our stakeholders both in the public and private sectors to attain our common aspirations of a digitally empowered Philippines. As a country, we are very eager to take an active part in building a better digital future for all as our commitment under the Bucharest Declaration,” DICT Secretary Ivan John Uy said as he addressed the nation’s win in the ITU Council.

DICT Undersecretary Jocelle Batapa-Sigue assisted in the country’s successful bid for re-election and will be representing the Philippines until the end of the Plenipotentiary Conference on October 14, 2022

“To us in government, it may be just work, but for others, it may mean their lives, their food, their education, their health. Let’s help the world in the next four years with every [bit of] knowledge, every sharing we can share. The PH is blessed to stand among nations and have a voice in the next four      years. Let us show the world that DICT is a government agency of global standards. Let us use this seat, this voice to help build a better digital future,” Batapa-Sigue asserted.

The DICT is expected to lead the country’s involvement in discussions and decision-making that will significantly affect the member states’ digital agenda. The Department also enjoins the support and collaboration of government agencies to achieve its goals as a Council member.