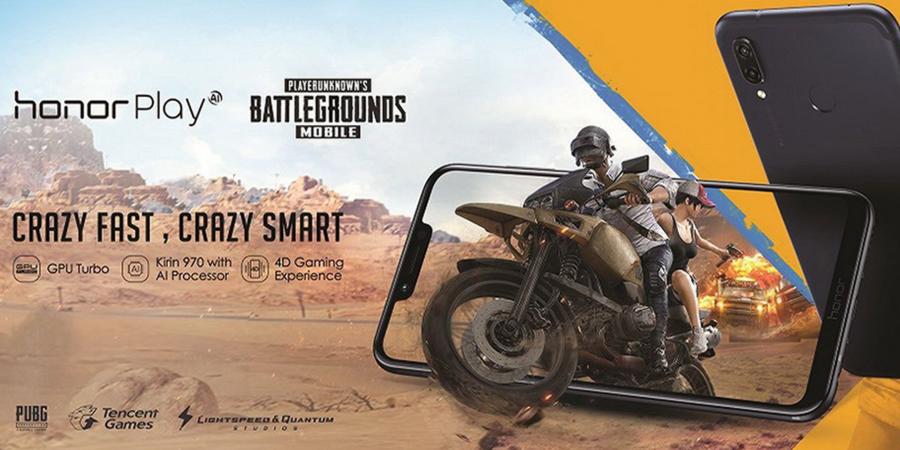 Honor is teaming up with PUBG MOBILE and Asphalt 9: Legends to revolutionize the mobile gaming industry, starting with the Honor Play's unprecedented speed and performance, its enhanced graphics quality and extended battery life, plus an exciting series of all-star gaming experiences.

Honor is working closely with PUBG MOBILE, one of the world's best tactical tournament games developed by Tencent and PUBG Corp., to co-create amazing gaming experiences for Honor fans globally.

As a trend-setting brand in the smartphone industry, Honor is proud to announce PUBG MOBILE as the Honor Play Official Gaming Partner, a gaming title that was awarded the Trending Game of the Year by SXSW Gaming Awards this year and has over 10 million daily active users around the world (excluding China). Both PUBG MOBILE and Honor bring friends together for exciting experiences.

This gaming partnership will take this experience for Honor fans to a new level with the Honor Play.

These two industry leading technology and gaming brands have established a strong relationship to apply Honor's latest gaming technology on PUBG MOBILE and execute gaming campaigns around the world with the Honor Play.

To offer a smoother and more comfortable gaming experience, Honor has partnered with PUBG MOBILE to customize the in-game graphics performance with the support of the Honor Play, featuring a close to full frame rate of 39.46[1] and a stable jitter rate of 0.21%[2]. More Honor devices are expected to partner with PUBG MOBILE in the future.

At Gamescom this year, Honor and PUBG MOBILE invited gamers and fans to put their skills to the test in Cologne, where they competed in teams with and against the world's star gamers and had the chance to experience the Honor Play's unprecedented speed and performance at the show. Honor and PUBG MOBILE will host more online tournaments and offline campaigns across Western Europe, CEE & Nordic, Asia Pacific, Middle East, Russia and India.

Honor is working with Asphalt 9: Legends, the most popular car-racing mobile game in the world created by GAMELOFT, to take gamers to a new level in their mobile car-racing experience with the Honor Play. The collaboration with Asphalt 9: Legends has a lot of potential and this is not the first time for Honor has partnered with Gameloft. For the Honor 5X, Honor worked with Gameloft to launch the #Asphalt8HonorCup Challenge. For the Honor View 10, Honor collaborated with Gameloft to launch the Modern Combat Versus Honor International Series Esports Competition.

Both products and events were incredibly successful and were crucial in Honor's decision to partner with Gameloft in confidence for a third time.

This virtual surround sound provides a cinematic experience from different directions, allowing gamers to locate enemies and gunshot direction with precision. On PUBG MOBILE, the AI 4D Smart Shock function is also enabled for 30 different scenario vibrations, and will respond according to the direction of approaching enemies or gunfire, and you will even feel the kickback as you pull the trigger.

The Honor Play also features an enormous 6.3-inch FullView display with an outstanding 19.5:9 aspect ratio and a huge 3,750mAh battery that supports at least 4.5 hours of gaming. Gamers can enjoy a more pleasurable visual experience on gaming and multitasking, together with 24/7 entertainment.

"The launch of the Honor Play represents a quantum leap for the mobile gaming user experience. Honor is not just offering an exceptional experience, we are partnering with top-tier gaming developers to create more fun experiences for gamers too." said George Zhao, president of Honor. "The Honor Play is the "Game On" moment for Honor, for mobile gamers and our partners."