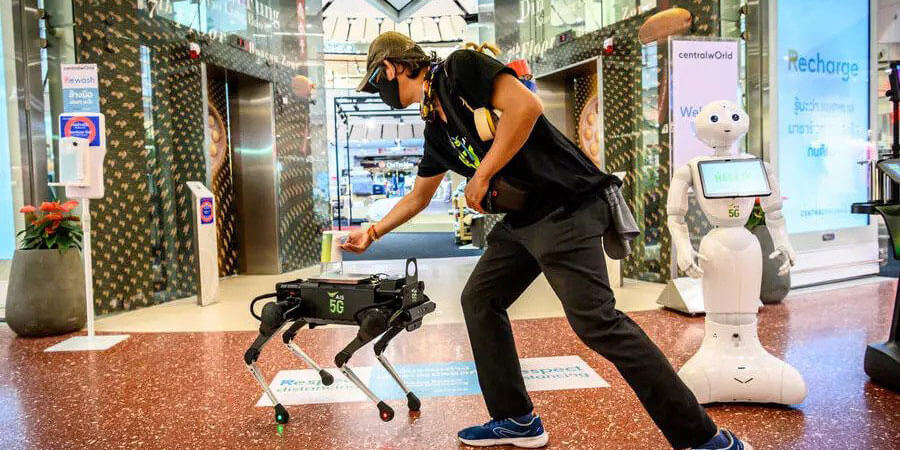 The hi-tech hound is controlled using 5G, a technology promising super-fast internet speeds with immediate reaction times that is still in the initial stages of roll out in Thailand.

Mimicking an excited puppy, K9 roams around the popular Central World mall in downtown Bangkok, drawing the attention of delighted children eager to get gel from a bottle attached to its back.

"It's convenient for people to wash their hands, just like a preventive measure, especially in this COVID-19 situation," said Petra Saktidejbhanubandh, a marketing officer for mobile operator Advanced Info Services (AIS).

AIS is aiming to roll out a 5G network for smartphones by the end of the year.

K9's 5G-powered comrades include ROC, which checks temperatures, and LISA, a customer service-bot.

"For K9 especially, people just think it's really cute," Petra said, adding they hope to dispel any fiction-fuelled fear of a robot takeover.

"The robots are here to assist people, not to replace them."

"I think the execution, like the robot itself, is a bit scary," the 29-year-old said, though she admitted that giving out hand sanitiser is a "good idea".

Thailand has gradually lifted restriction on businesses, which have taken precautions such as seating customers apart in restaurants or erecting plastic dividers in massage parlors.

The kingdom currently has 3,101 confirmed cases of the virus and 58 deaths.