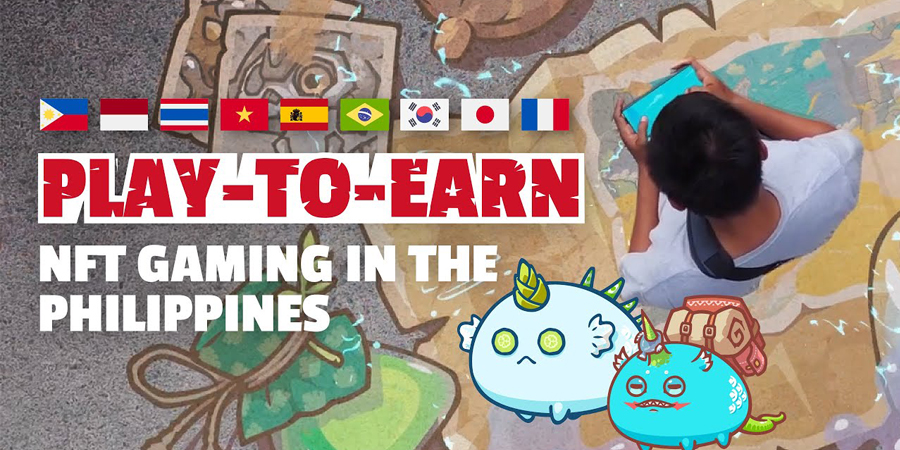 Sitting in front of his computer in Manila, Philippines, Dominic Lumabi fights small fantasy creatures in a video game. But it's not all fun and games: he's earning crypto-currencies to support his pandemic-impoverished family. Axie Infinity is a blockchain-based game that allows you to win money in the form of NFTs, digital tokens stored on blockchains, a decentralized digital ledger that cannot be changed. Created in 2018 by Sky Mavis, a firm based in Vietnam, the game exploded in developing countries when Covid-19 destroyed jobs and forced many people to stay home.

About 35% of the traffic and the majority of the 2.5 million daily active players are based in the Philippines. Dominic Lumabi started the game last June after losing his job at an advertising agency. In the game, he participates in battles between Axies, colorful characters, and earns "Smooth Love Potion" (SLP) that can be exchanged for money or reinvested in the game. Playing two hours a day, he earns 8,000 to 10,000 pesos (138 to 172 euros) a month, the equivalent of half his regular salary as a content moderator. His earnings allow him to pay his sister's university fees, groceries and bills. Expenses that his father's struggling repair business can no longer cover. According to Leah Callon-Butler, a technology consultant in the Philippines, the pandemic offered Axie Infinity the "perfect environment" to attract gamers. "They could stay at home, safe from the virus, and play a cute game while earning money," she says.

But in order to start playing, you must first buy at least three Axies. Axies are NFTs, and can be bought, sold or rented to other players. Players can also breed Axies to create new ones. During the peak of the game's growth last year, a team of Axies could cost several hundred dollars, an investment out of reach for many players. As of February  9, the cheapest Axies on the market cost $37, or $111 minimum to start playing. Players who spend more get better Axies, giving them more chances to win battles, and thus SLPs. Those with the capital to build more lucrative teams have set up "exchanges" – asset sharing systems where players are charged a percentage of their winnings.

As the number of daily active players exploded in 2021, the price of Axies and SLPs skyrocketed, raising questions about the sustainability of the game. Sky Mavis derives its revenue primarily from the reproduction of Axies and market fees, with total revenue of $1.2 billion.But some analysts say the business model is unsustainable, pointing to the need for new players to keep the money coming in. Jonathan Teplitsky of Horizen Labs sees most of these games as "houses of cards," fueled by "hype and speculation."Axie Infinity is "not a zero-sum game" argues Trung Nguyen, co-founder and CEO of Sky Mavis, assuring that players do not get "just monetary value" from it. For several months now, however, SLP has experienced the kind of volatility seen with many other crypto-currencies. Last year, when the game was updated, its value rose from 3.5 cents on April 26 to 36.5 cents on May 2, taking more than 900 percent in less than a week, according to specialized data provider CoinGecko. But by the end of last month, it had dropped to one cent, sending the revenue players could expect to earn from it plummeting. As a result, Sky Mavis changed the game to limit the number of tokens a player can generate, acknowledging concerns about inflation. The currency has recovered slightly, reaching about three cents. To add to the woes of Filipino gamblers, the country's tax authority declared last year that gamblers must pay taxes on their gambling winnings. Dominic Lumabi's monthly earnings have dropped by more than half since he started playing, but he's not letting it get him down and recently bought two Axies teams for his girlfriend and sister. "As long as I can make 100 or 1,000 pesos a month, I still consider it a profit," he says.