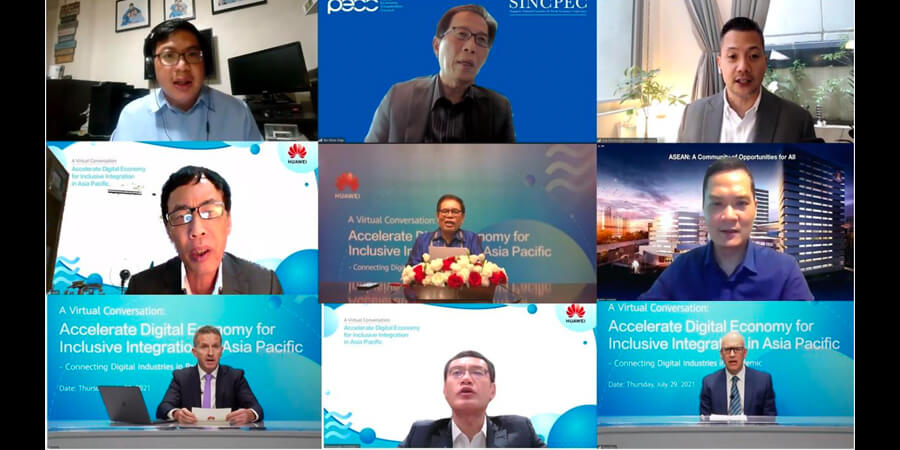 Huawei hosted on 29 July a webinar themed “Accelerate Digital Economy for Inclusive Integration in Asia Pacific – Connecting Digital Industries in Pandemic”. The main objective was to call for dialogue amongst thought leaders from governmental, industrial, and academic sectors across the Asia Pacific to discuss key issues, challenges, and actions towards building an inclusive and digitally connected region.

In his opening speech, Jay Chen, Vice President at Huawei Asia Pacific noted that the digital economy will be the backbone of the future global economy. “The digital economy is not only a resilient counter response to socio-economic disruptions, but also a long-term engine for regional growth and inclusion in ASEAN,” he said, referencing Huawei’s research that countries with higher levels of ICT maturity respond better to the devastating impacts of the pandemic, with GDP per capita expected to decline 50% slower.

However, as countries build digital readiness, not all economies would be able to transform at the same pace, therein lies the risk of a widening digital gap that can undermine inclusive recovery in the Asia Pacific.

In his keynote speech, ambassador of Indonesia to China, H.E. Djauhari Oratmangun highlighted the role of private sector partnerships in advancing the nation’s digital ambition: “Indonesia has formed a task force to spearhead regional digitalization to accelerate transformation and raise economic competitiveness. Transformation will be applied to businesses and government bodies to promote good governance and grow the country’s digital economy, estimated to grow eightfold by 2030. We will continue to deepen collaborations with global partners including Huawei to strengthen areas in telecommunications infrastructure, 5G technology, and artificial intelligence to achieve our goals.”

Speaking about the region’s prospects as a digital power, Dr. Le Quang Lan, head of the ICT and Tourism Division noted that ASEAN’s digital economy surpassed US$100 billion for the first time in 2019, and is estimated to reach US$300 billion by 2025. He outlined key ASEAN policies to achieve sustainable and integrated digitalization and called on the private sector to actively participate in this revolution: “We welcome Huawei’s initiative to organize this dialogue to practically advocate the process and contribute to shaping up a fair and open digital policy within the region.”

Despite the opportunities brought about by this current wave of digital transformation, Professor Jose Decolongon, COO and managing director of Corporate Foresight Embiggen Consulting said, “Micro, small, medium enterprises and even large organizations face challenges relating to the coverage and speed of current digital infrastructure. This is where telecom players such as Huawei and other local players play a very important role.”

Echoing this sentiment, Dr. Tan Khee Giap, chairman of Singapore National Committee for Pacific Economic Cooperation stressed the importance of ubiquitous connectivity in both urban and rural areas to prevent a widening digital division. “Digitalization is not just about technological progress, but quality empowerment of digitalization to the public at large if inclusive integration is to be achieved. The role of the government is to provide digital capability as a public good. It can be complemented by private sector ICT companies such as Huawei,” Dr. Tan opined.

In terms of ICT connectivity, Huawei has been partnering with operators to enhance network quality and coverage, especially in rural areas. Huawei’s RuralStar Program, for instance, has already benefitted over 60 countries including Thailand and Indonesia.

Adding to the challenges faced by the digital underclass in the region, Dr. Alvin Ang, professor of Economics Ateneo de Manila University cited urgency in raising digital literacy and skills as countries grow their digital footprint. “We must lay the basic foundation for our people to acquire the necessary knowledge and skills to move forward in a digitalized world,” said Dr. Ang. “Countries have in place road maps to chart digitalization, but the impacts of technological progress must be felt at the ground. Now, we are tasked to implement what we have planned.”

Recognizing the lack of digital literacy as a top barrier for digital inclusion, Jay shared Huawei’s on-going collaborations with governments and learning institutions to upskill workers and groom ICT talents in the Asia Pacific. “In the next five years, Huawei will train another 400,000 digital talents to close the digital skills divide,” he said.

Djauhari also took the opportunity to affirm Huawei’s effort in “upskilling employees in various SMEs across 50 different sectors, as well as establishing ASEAN Academy to engage some outstanding universities in Indonesia, benefitting engineers and students”.

Optimistic about the growth potential that digitalization brings, Dr. Vo Tri Thamh, director for the Institute for Brand Strategy and Competition said, “Vietnam is now at the turning point for development towards higher productivity and innovation. We want to tap on the fourth industrial revolution to digitally transform and seek the golden opportunity for Vietnam to catch up with other ASEAN countries.”

On the same note, Dr. Le said, “With about 360 million internet users in ASEAN, and most of them possessing more than one mobile phone, computer or laptop, we essentially have the fundamentals of a scalable digital economy. We want to transform the ASEAN economy into a single digital economy and powerhouse where businesses or unicorns can maximize the benefit of an integrated ASEAN digital economy.”

Acknowledging that SMEs are key drivers of the region’s digital economy, Huawei has been tapping on industrial opportunities and innovative synergies in the Asia Pacific to hone start-ups into scale-ups. Through the Huawei Spark accelerator program, Huawei has been providing upgraded ICT advisory and end-to-end support to incubate and accelerate start-ups in the Asia Pacific. Huawei has also been increasing investments in harnessing green technology, leveraging clean power generation, electric transportation, and smart energy storage.

Throughout the discussion, it is clear that the region is digitally, socially, and economically motivated to create an integrated and sustainable digital future. Operators, vendors, governments, and industries need to join hands to make this shared vision a reality. As Jay summed up, “It takes time and effort but if we move a step forward today, we will get there tomorrow.”